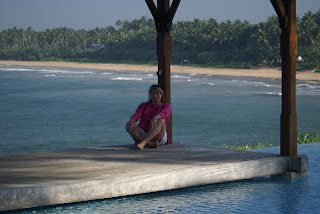 Despite leaving the Sri Lankan sunshine (33 degrees) to return to the cold Cumbrian weather (minus 3 degrees!). It is good to be home. I received a very touching welcome back from the herd....a tear to the eye moment. I did once read that alpacas "learn to tolerate human contact" . Ours obviously haven't read the book if judging by the bidding for attention is anything to go by (and not a feed bucket in sight!)
The team (Robyn, Craig, Amanda, Mum & Dad) have done a fantastic job. Not only were all the animals looking extremely well and the paddocks poo free, the house was actually cleaner than when I left! We arrived home seriously jet lagged after a eleven and a half hour flight on a plane filled with coughing and sneezing passengers. It did cross my mind to ask, "would any owner subject their alpacas to such conditions" (a rhetorical question I think). Whilst Paul was reading James Patterson to fill in the time, I had managed to sneak Alpaca World, which had just arrived as we were leaving, in to my ruck sack. Well we were on our way home!
It was back to work straight away on Sunday, weaning 3 of the boys. Felix, Fidel and Jenson were due to be weaned late December but due to the bad weather we gave them an extra month. I did feel a bit mean, but nobody seems to be complaining too much. In fact I think the mums are actually relieved. We also did some trimming around the eyes of a couple of the 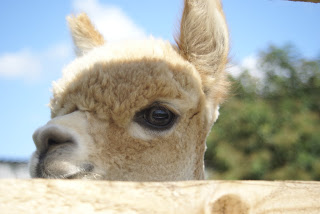 boys. Almost Illegal, aka Almo (pictured) just stood enjoying the attention. He has such long eyelashes I was having trouble avoiding them. He now looks very cute again and in addition he has the bonus of being able to see when Hollywood is on the prowl for trouble!
It was good to get away and I have returned full of enthusiasm for all the tasks on the ever increasing list. According to Robyn, Hoity Toity has been acting like a 'normal alpaca' whilst I have been away. Eating out of the trough like everyone else. I was obviously being taken for a soft touch, but I knew that already!
Thanks again relief team. Glad you enjoyed.
Posted by Unknown at 13:41