Come on the girls!

Well its been a busy old week, as the girls just keep on coming!

On Thursday it was Ep Cambridge Aria (sire: Ep Cambridge Peruvian Ceaser) who decided that the weather was just right for a special delivery. Aria was due to have our first Beck Brow Explorer cria of the year so we (mainy me actually) were (was) rather excited...Velvet the dog likes a birth, but I don't think she is bothered who the sire is. So I called Amanda to see if she wanted a coffee whilst we waited, then Robyn and Hettie turned up, so Soprano was welcomed in to the world by an appreciative audience

As it would be Amanda and I had been discussing whether we should put Explorer over more coloureds so see what he could produce. We knew that both his dam (Cambridge Camilla) and his sire (Ep Cambridge Navigator) had produced colour, but had one of them passed on that coloured secondary gene? I had commented to Amanda maybe we will just find out by breeding him to whites (both passing on a secondary colour gene). Well we didnt have to wait long...Soprana is a lovely deep apricot colour...and the spitting image of her sire as a cria! 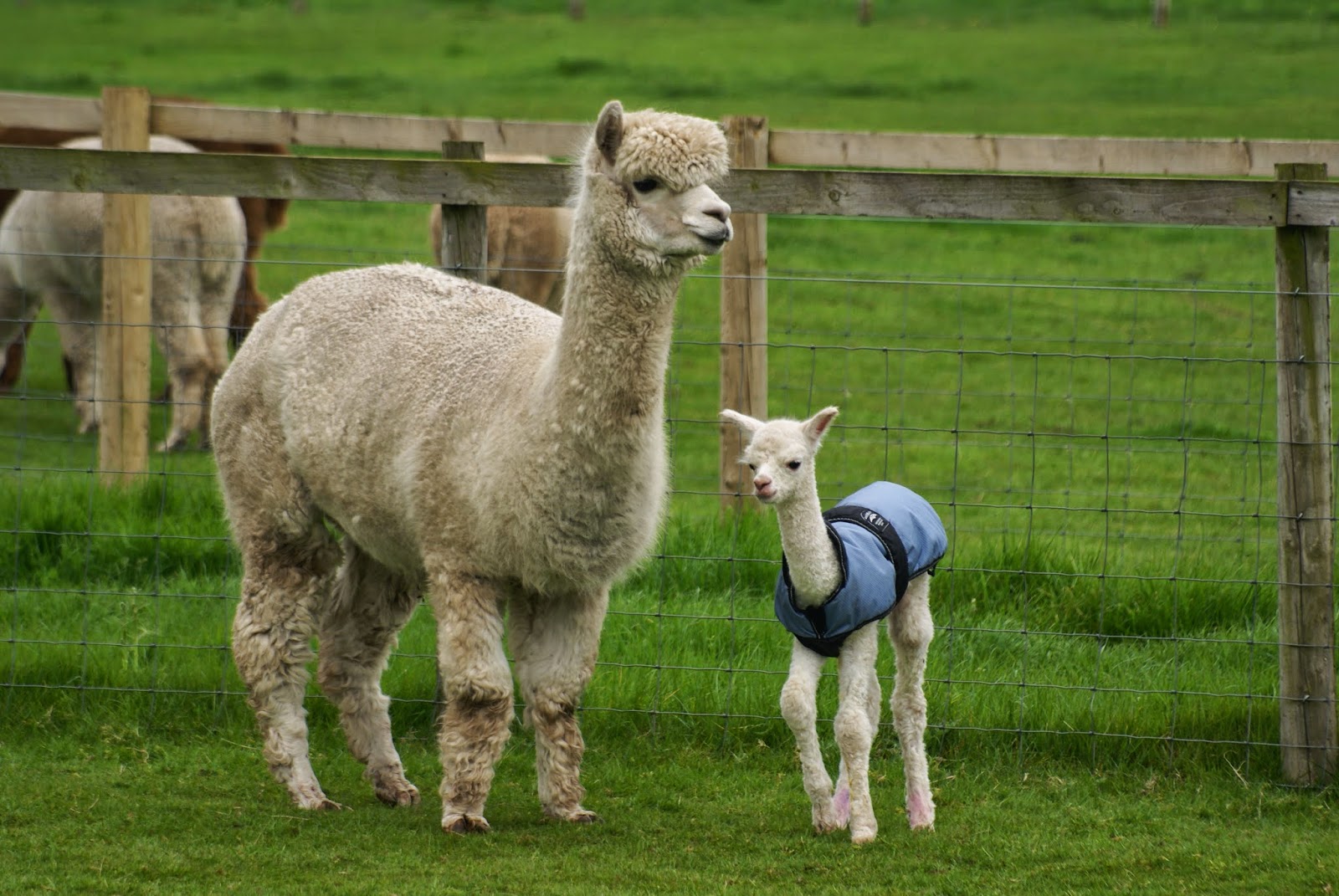 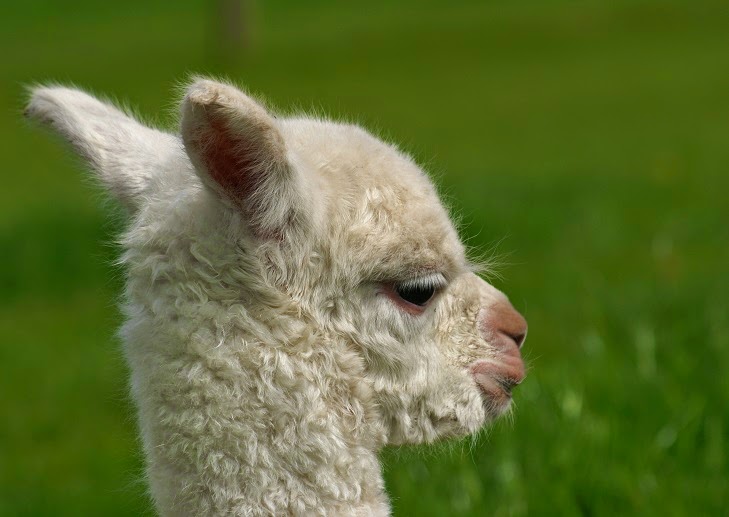 Whilst this was happening Paul was on his way to Heathrow to collect our Australian females. It was a long trip from New Zealand via Singapore (with stops in between) all the way to Heathrow. Lots of checking on arrival of 92 alpacas and a group of horses, meant that Paul didn't arrive home until 8am on Friday.

I was amazed at how calm all three females were when they were unloaded. It hadn't been our plan to transport such a young cria, but the original plan to fly in March hadn't happened. It was then decided that Cambridge Stargazer would be too pregnant to fly in May. However, she had other ideas, and decided to birth on the 6th April. Stardust was very prem. However, although only 6.5kgs she was a fighter. She needed a plasma transusion and antibiotics, but then never looked back. So we made the decision to bring her into the UK at the start of summer, rather than leave her in NZ at the start of winter.

After clean feacal egg counts and prophylactic Cydectin and Baycox (just in case not shedding), and 24 hours on concrete they are now in with the small birthing group. I just cant believe how chilled they are, coming into the barn for feed straight away.

They are such an exciting addition to the Beck Brow herd. Bred by Ep Cambridge Alpaca Stud; Cambridge Stargazer (white) and Cambridge Summer Solstice (fawn) are both sired by the amazing Windsong Valley Firedragon (bought for $AUS 165,000 if my memory is correct!). Their density has me awe struck. Stardust is sired by Ep Cambridge Spartacus (sire of some of the top stud males working in Aust, UK and mainland Europe) and is lovely...Happy days! 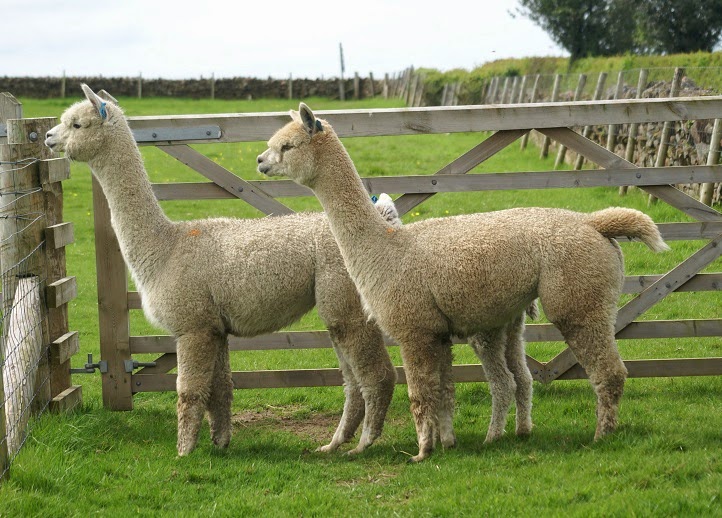 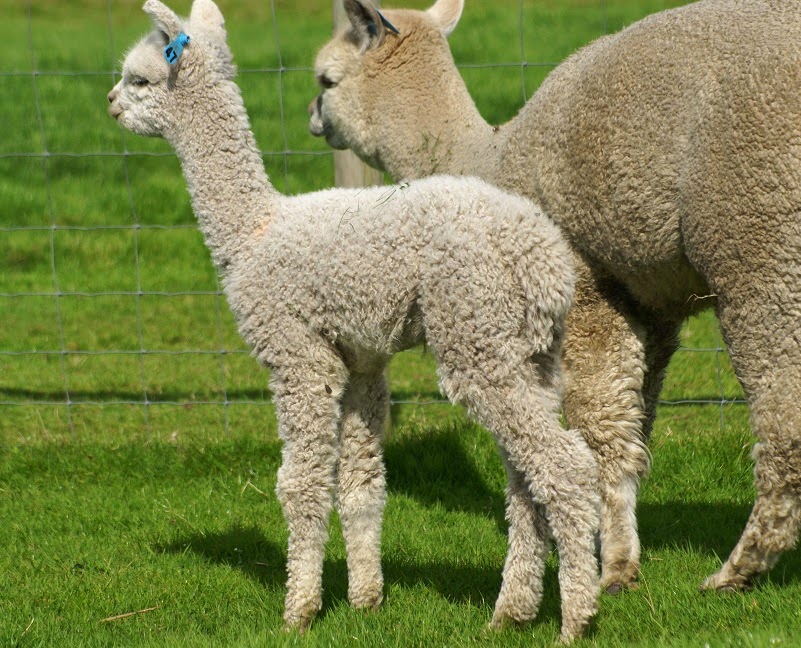 Stardust with aunty Solstice who does seem to do most of the child care! 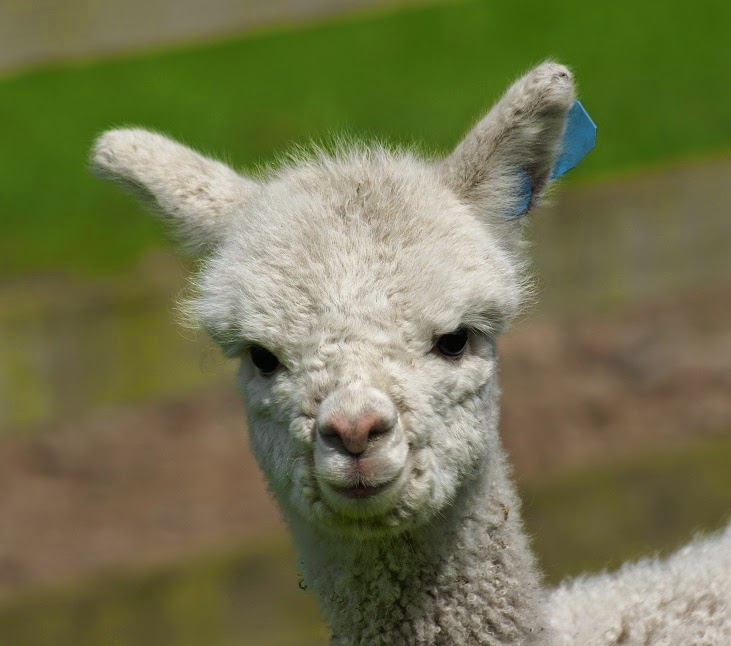 We have been having some more fencing done in order to create another isolation paddock (the last one!). It seems that I am considered the Imelda Marcos of gates. Our fencer claims not to have seen so many 12 ft gates on our acreage before. I think he is just teasing...I have had a count...32 on fify acres is that a lot...okay maybe I like a wooden gate or two!

It was halter training on Sunday. Four of our boys will be going to their new home in a couple of weeks, so we need to get them fully trained. Below is Craig with Orlando, behind is Robyn with Epic..a new home for Epic...I dont think so! 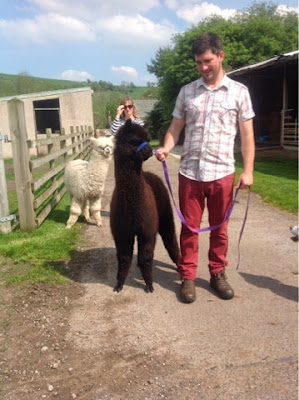 Well the sun is shinning, ideal for birthing. We have some exciting births due, including Bozedown Celestrial (a favourite of mine) and Bozedown Magic Charm. Both girls were bought at the Alpaca Classic in 2012. Our 2013 purchase, the lovely Bozedown Campari, has had a date with our Timbertop CT Goldmine ...and seems to be rather pleased with herself since...should be a cracker!

As I am still feeling under the weather ...the chest infection has resulted in an ear infection which has resulted in a perforated ear. Yes, I do now have antibiotcs, and yes, I should have had then ages ago as advised. Yes, I am not Superwoman...so I asked Paul if he would head out to feed the alpacas, and said that I would follow.

So I stroll out at 08.30am and Paul has shut in all of the girls at feeding, just in case I want to do anything with them. He is busy sweeping up. As they are in, I decide that we should put some cream on some dry skin...then when I look round...there is EP Cambridge Lady Gaga calm as you like, wandering around with a head and two legs out the back! Now Gaga is elegance personified, no groaning screeching or fuss from her. I open the barn door...out she strolls...and neatly drops a light fawn (could be beige) female! That's three females in a row for Gaga; Snooty Boots, Cat's Pyjamas, and now Posh Pants! 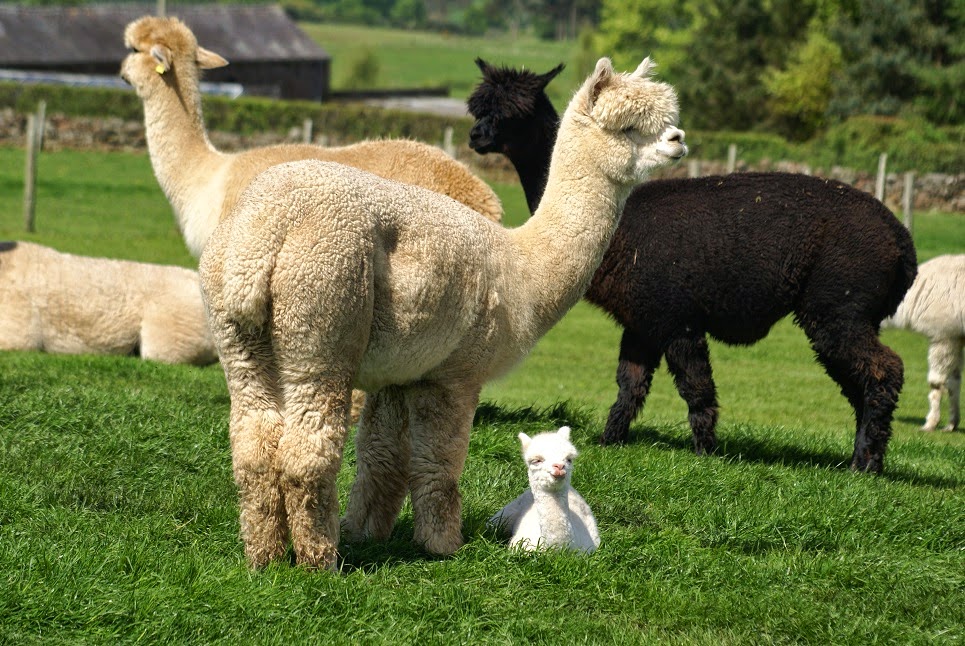 That's also three females in a row for us; Stardust, Bunny Girl and now Posh. As I write Stardust is on the leg of the flight to Singapore. Slightly delayed, Stargazer, Solstice and Stardust are due to land Heathrow  about 8.15pm tomorrow. However with a number of horses and 92 alpacas to unload and get vet checked, it is going to be Friday morning before they are heading for Cumbria. We have just heard that Gilt Edge Gold Standard (sired by our Goldmine) will be on the flight, heading to Belgium where he will be at stud.

Before they all arrive and take centre stage, I though that I would share a couple more photos of Bunny Girl...I am smitten...she is lovely...fleece and personality! 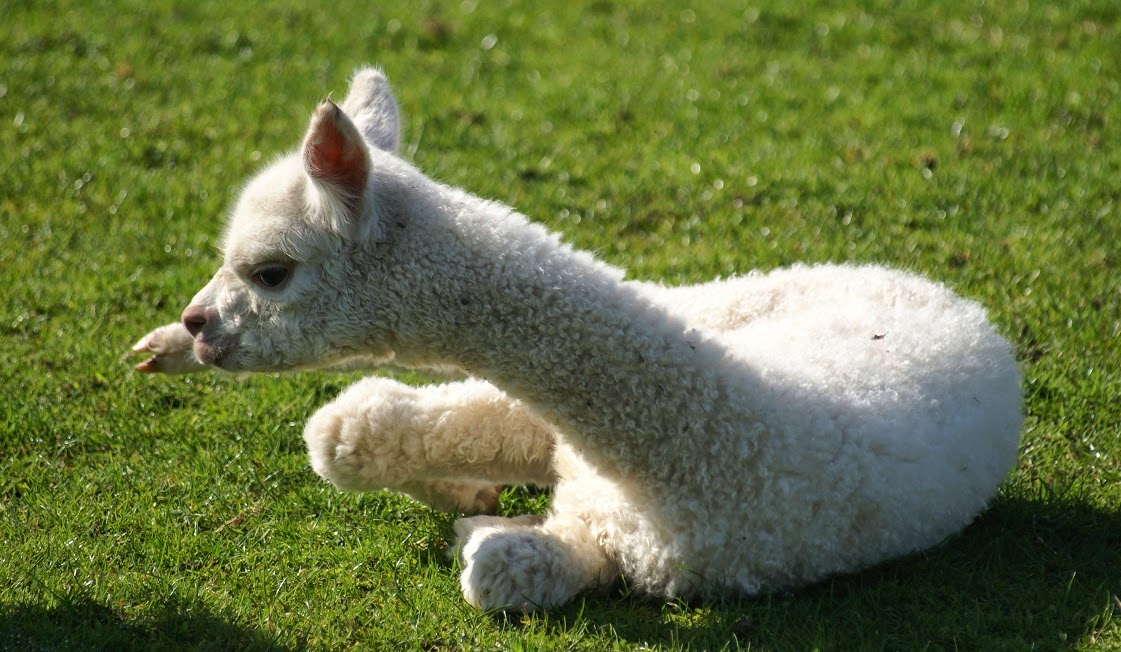 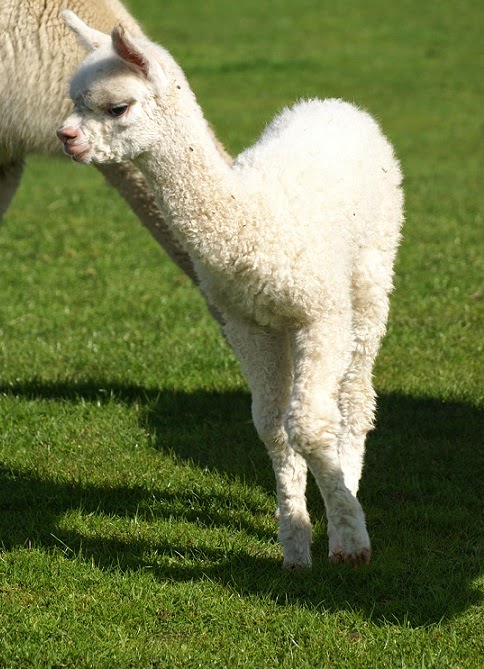 At last we have some sunshine...here is Anzac Showpiece... having rolled in the mud bath, then enjoying some rays! 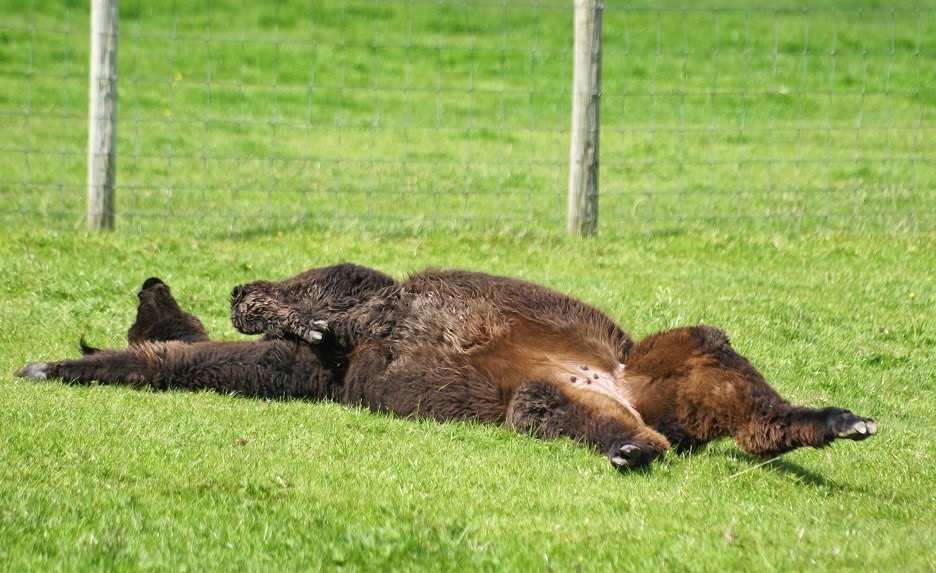 I seem to have been taking bookings for stud services with Beck Brow Explorer, nearly everyday lately...this is making me smile, for I haven't told him yet. I bet you are thinking...wow he will be pleased...but he won't...no, he the lasiest alpaca ever. He always performs, and has a very good first time strike rate...but 10 minutes is all the girls get if they are luck. We are waiting for Aria to birth (she is huge) she was mated once with Explorer for 4 minutes! Maybe I am being a bit unfair...maybe not lazy...he just conserves energy very well...
Posted by Unknown at 15:34 7 comments:

At last our first cria of the year has been born at Beck Brow. Now I hate to say that I was right (I know by the law of averages it is bound to happen now and again) but I did say that we had never had a cria born before May...and despite EP Cambridge Courtesse being due on the 27th March...she birthed at 5pm on the 1st May!
Unfortunately, all the waiting hadn't improved the weather, and Bunny Girl was born on a cold, windy day, and rather late in the afternoon. She ended up having to get a warm up with the hair drier when her temp dropped, then once warm, given some cows colostrum to get her going. Born at 9kgs on Thursday, she weighed in at 9.4kgs today, so doing well. Although she looks white in the photo (I was sure of it) she has definitely dried to beige. With her sire being Sanjo Shalimar, she is full sister to Kingwell Diamonds are Forever, who won the Female Light Championship at the NWAG Show recently. 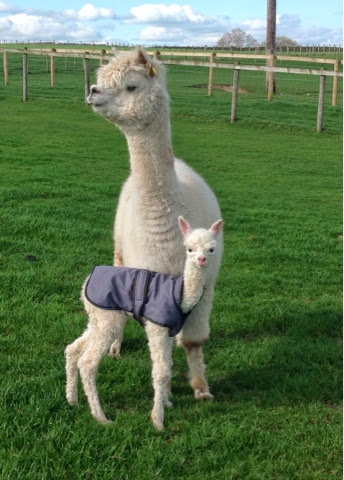 EP Cambridge Courtesse with Beck Brow Bunny Girl
Despite feeling rather under the weather with a chest infection (I blame the Fiesta...alpaca bio security high...personal bio security low!) we have managed to do a few routine chores. The whole herd have been drenched with selenium, mineral and vitamins and we have also given everyone a shot of Dectomax (and spray between the toes with an Eprinex mix) against mites.
It was during these procedures that I inadvertently revealed...who is the true love of my life...it wasn't intentional, and I expect not really a surprise...but all the same it was unnecessary. It happened when we were treating five of the big boys. Beck Brow Explorer thinks that he is King Dick (well he is kind of) and hates to be compromised in front of his minions... hence we left him until last.
So Paul held Explorer whilst I injected him, and down he went, as is the norm. I then turned to get the spray...and all of sudden there was this hullabaloo...Paul is squarking...Explorer is furious...Paul is lying on Explorer's back smelling his butt...legs either side of Explorer's neck (picture someone sky diving) ...Explorer is spinning round...he is more than furious he is livid. This is where I shout...DONT YOU DARE HURT HIM...this instruction was aimed at Paul! Oh dear showed my true colours... Explorer wins!
My self control weakened this morning, despite all good intentions to tighten our birthing season in 2015, I have started earlier then intended. Carrying on with the theory that nothing gets born before May anyway, I thought we may as well get on with it. So Silverstream Galaxy (19 microns at 6 years old) had a date with Timbertop CT Goldmine ET...this time next year will be exciting! 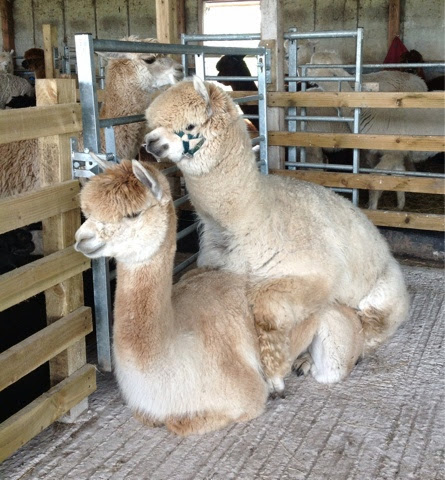 Goldmine and Galaxy
I ended up popping along to the Syke a House dispersal sale today, with Ian and Angela from Hannahston Alpacas (just as a spectators). Although the auction was busy, bidding was slow and prices low. I expect many were purchased by people coming in new to alpaca ownership, as I had assessed a number of the alpacas for sale, and the prices realised didn't seem to bear any relationship to fleece quality, but more to do with how pretty they were...or not!
Posted by Unknown at 18:06 10 comments: