NWAG Alpaca Championships and other twitterings...

I have been hanging on...hanging on to the hope that we would have our first cria of the year born before I wrote this blog. Silverstream Galaxy (pregnant to Timbertop Goldmine) is our first due and is bagged up and hummimg away to her unborn (who is obviously in position to be born as feet can be seen pushing up mum's tail). Maybe tomorrow!

Galaxy is the dam of Beck Brow Crafter who was featured in my last blog. I am delighted to say that we have recently found the perfect solution to our dilemma regarding his future. Fangdale Alpacas, based in Yorkshire were happy to work with us to ensure we kept some interest in him. Thus, whilst Fangdale are now his proud new owners, they have allowed us to retain some stud service for the future. We wish them every success.

The show was fun as always. With Mary-Jo Smith judging and Julia Corrigan-Stuart as apprentice, we all learnt lots as well as enjoying ourselves. 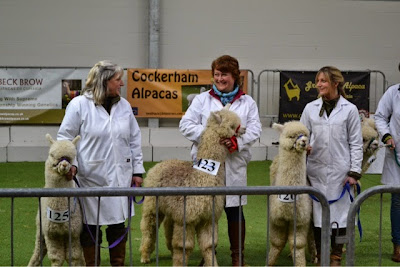 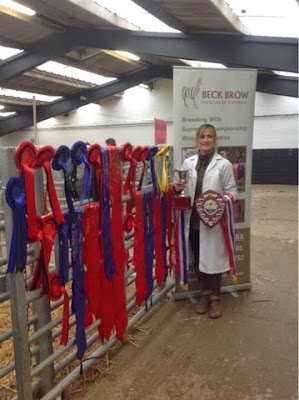 Robyn with our stash, only two thirds (where we had first in the classes) and everyone else first or second (in many cases second to ourselves!) We also took Florens Juno (sired St Patrick) who took the Fawn Female Championship for Amanda. We  did well in the progeny classes with Beck Brow Explorer getting first in the light sires progeny and Viracocha Black Sabbath  first in the dark sires progeny (no rosettes as we had just ran out!) 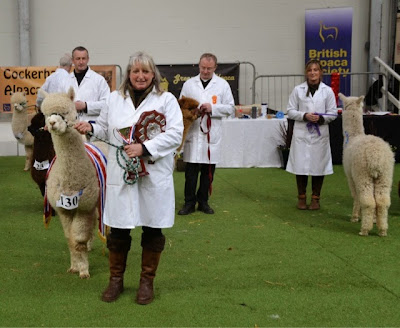 Beck Brow First Edition taking Supreme with Raffles, Prime Suspect, Seventh Heaven and Trendsetter in the line up, only Boxster out of the shot. 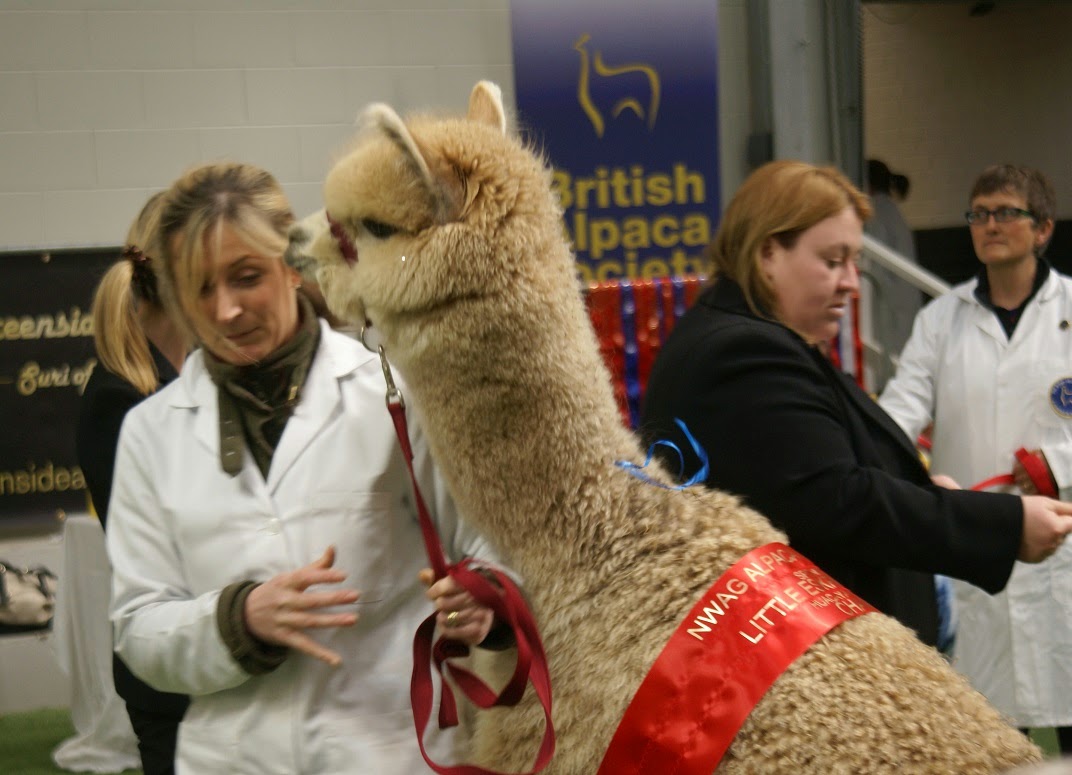 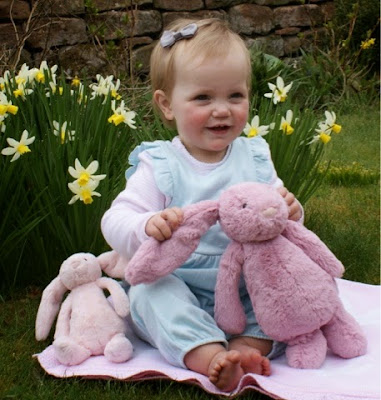 Despite mum being busy in the ring, our grandaughter Hettie enjoyed some Easter sunshine 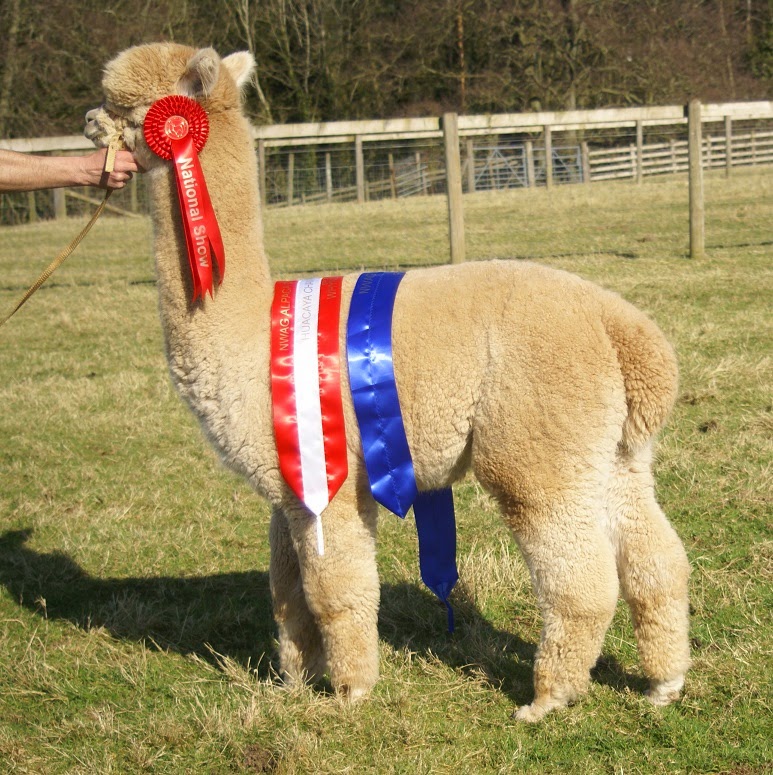 On Sunday, I felt that I was due a well earned rest...but no. We separated 80 females into 3 different groups. Those due in the next 3 months, those due late summer, and those not due at all this year. Not only does this help with feeding regimes for differing needs, and makes observing those due easier, I do think they settle better in with those of similar status. You know what its like as a teenager you don't want to be stuck with a load of pregnant females discussing the colour of the nursery. Likewise when you are nesting ready for birth you don't want 25 youngsters pronking about and reminding you of how young and slim you used to be. Whilst we were at it everyone got their selenium and mineral drench, and those in the six week from birthing window, received their Lambivac.

The start of birthing is always exciting, but we have some of my extra special ones in the birthing paddock; Beck Brow Cats Pyjamas (Supreme Champion) was born within days of Crafter. Both sired by Wardene St Patrick, we knew these two were special from day one. Cats is pregnant to Goldmine. 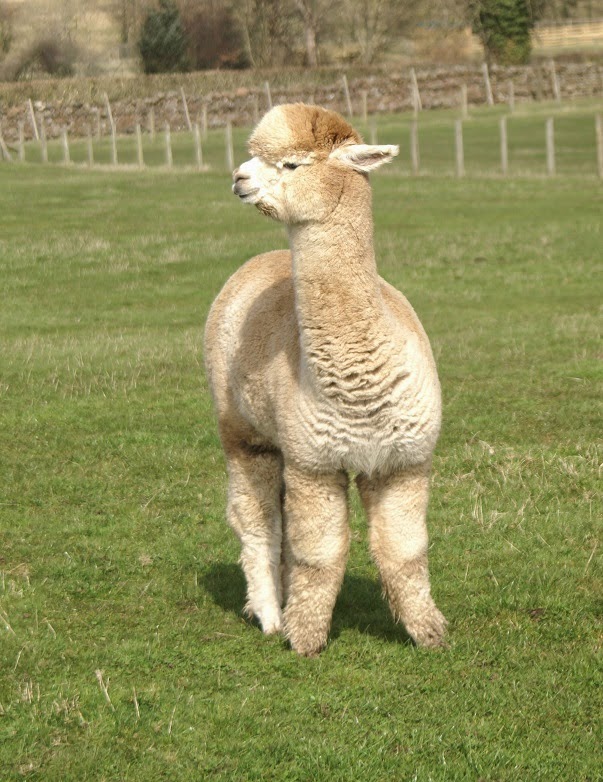 Also mid fawn, but looking rather pale in the photo, we have Beck Brow Foxy Sox (front) and Ep Cambridge Solstice back. Sox is a favourite here and is due her first cria (Goldmine) sometime soon. Solstice is without doubt our densest fawn female (sire Windsong Valley Firedragon) and is pregnant to St Patrick 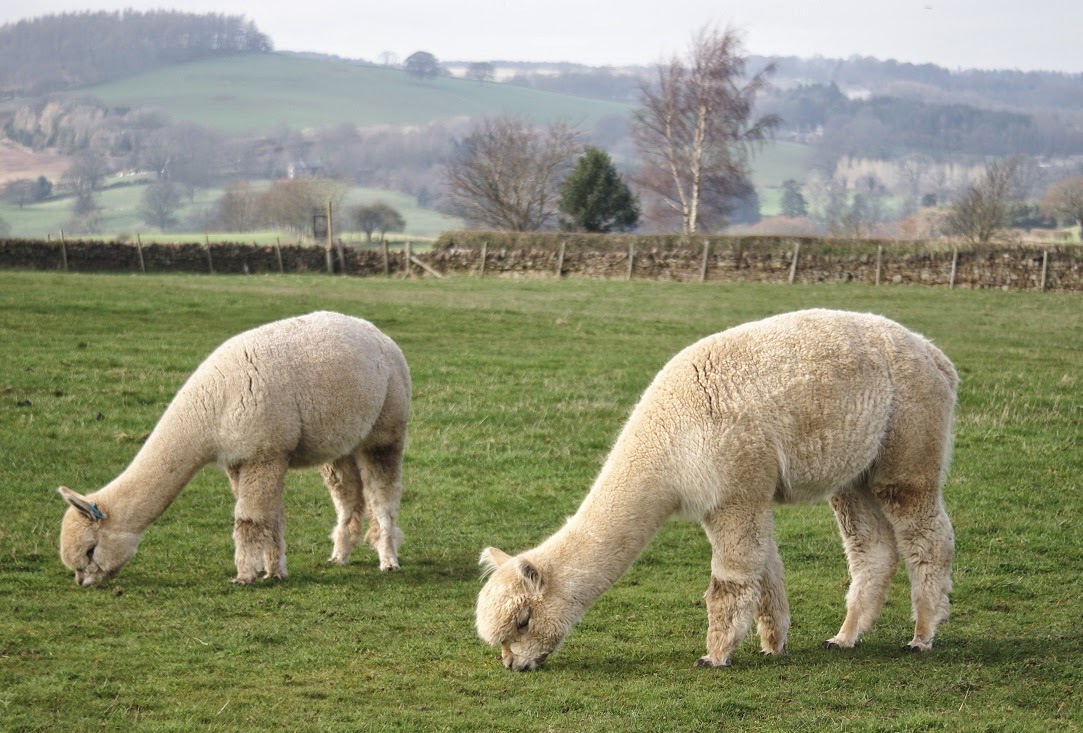 We have lots of breeding decisions to make, but until we see what Goldmine produces over the females he has mated, nothing is set firmly. We only put Beck Brow Explorer over one fawn female last year, as Kitty his fawn daughter was born at the end of the mating season, this again was his only coloured female covered in 2014. He is doing exceptionally well with our whites, so we are excited to see what he can do with colour, he will dating more colours this year (if we can persuade him...he does like his whites)

Two of our intermediate females awaiting a decision: 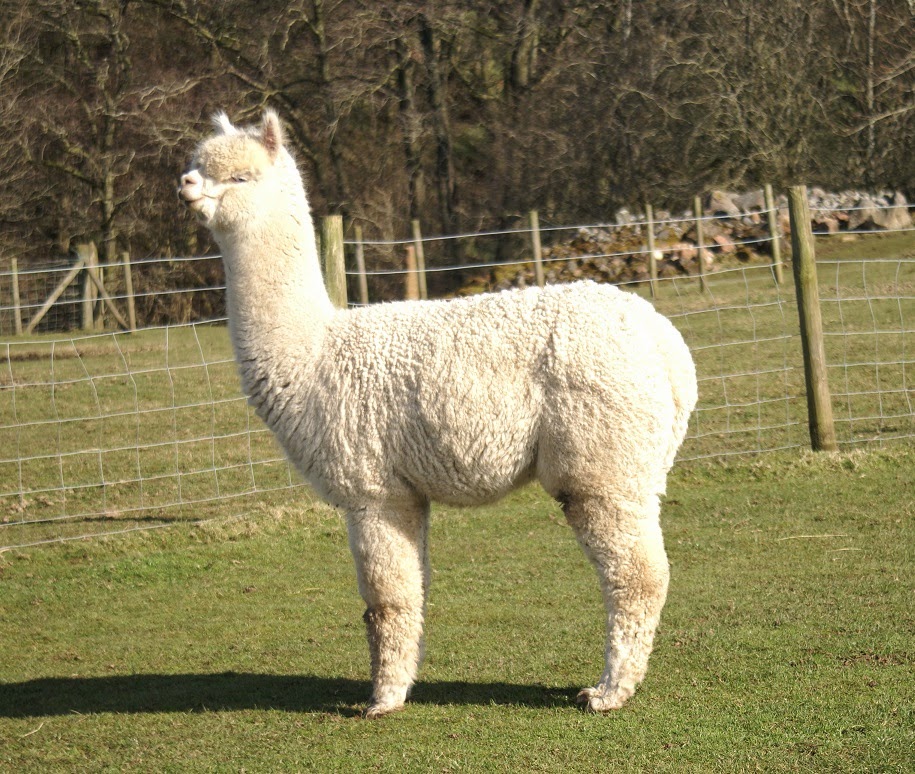 Beck Brow Hallelujah sired by Explorer (not quite sure why I missed showing her at NWAG)...a bit plump but not pregnant (she doesn't read this don't worry) 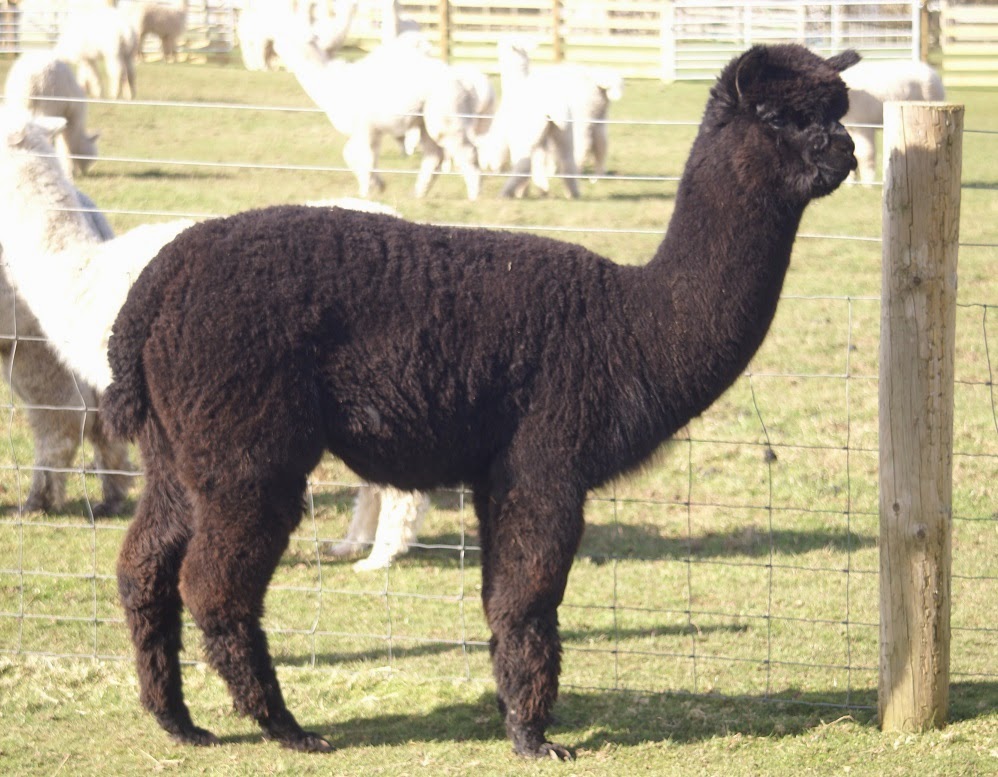 We are looking forward to a weekend with no showing, but wish all those entered at the Heart of England this weekend, the best of luck!