There was a little bit of drama here first thing this morning when I noticed blood dripping from Phoebe's mouth. I hadn't noticed it when I dealt out the food but then I do get mugged, so it is difficult to see clearly. My first thought was a dislodged tooth. I managed to catch her and felt her teeth, all seemed okay. My nurse's brain was thinking; fresh red blood, must be from the mouth (in humans blood from the stomach is dark due to the reaction with the acid). She was still eating okay...even if she was leaving blood everywhere. Second thought was that she had cut her tongue...tongues always bleed heavily.

I decided to wait and see, and it did stop of it's own accord. All the same I thought I would get out the text books to check my assessment...Okay I need to do some more homework... It is only the terminal part of the third stomach compartment that contains the gastric juices in Camelids so my theory would not have applied. Still assessment rather than panic is something! Looks like she did just have a cut.

It's still snowing here, although we are not in the same league as many parts of the country (you have my sympathy Jayne and Debbie). We are still at the stage where I am thinking the extra work is worth the splendor.

The temperature isn't as low today, I am not sure what it is exactly but the ice on the water trough was much easier to break today! I actually threw some hay out in the paddock this morning to tempt the girls outside. It does make life easier not having to sweep out the barn around all those alpaca legs! 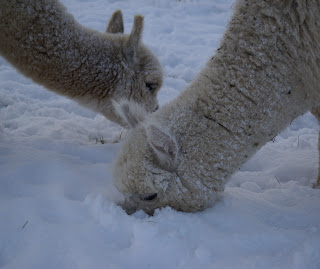 Nutmeg  and Noah (front in photo) ventured out to look for grass. Noah especially was making a valiant effort. 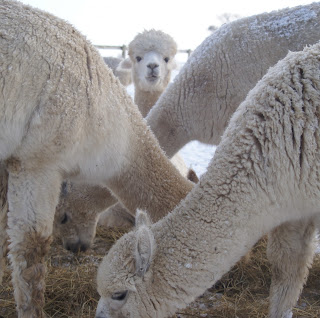 Honaria on the other hand was taking things very easy; sitting down to munch on the supplies and wondering what I was up to. 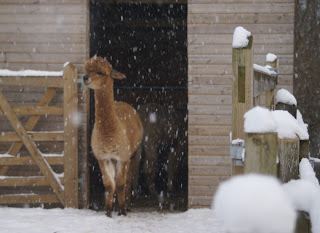 Nimrod appeared to be the one doing the weather (or should that be wether) assessment for the boys. Looks like he has got the position as St. Pat's man servant!

Talking of which; Paul is in the the bad books... Now, Paul and I are of a similar age...an age when our first cars came without a back window screen wiper, never mind a heated window screen...but we have moved on...well I have. Paul has a new car...it comes with above said items....however Paul prefers to scrape off the snow...old habits die hard. Paul also likes to use my 4 x 4 (even though he claims it to be a girl's version)...it also comes with said items...it also has a Beck Brow Alpacas logo on the back window screen....make that had...we are now eck Bro acas! Thanks Paul....USE THE DEFROSTING SYSTEM...I have paid for it!
Posted by Unknown at 14:25