By 17.00 hrs this evening I was beginning to wonder if EP Cambridge Lady Gaga really didn't want to come to live in Cumbria. Okay it can be wet in the North West, and a few degrees colder that the South, but we do have nice barns.

It has been a long nine months since we were the successful bidders for Lady G at The British Alpaca Futurity Auction in February. But for a variety of reasons she has remained at EPC...but today was to be the big day...the day that she was to be delivered to Beck Brow Alpacas of Cumbria...the day that the M5 was closed for four hours!

Thankfully Lady G, Waradene St. Patrick and Amanda's two girls did arrive safely accompanied by a rather exhausted Lawrence from EPC Alpaca Stud, who had been on the road since 08.15hrs. As it was dark when they arrived we did have to do a quick change of plan and Paddy has been put in the barn (previously stables) which has lights, so that we can check on him and see that he has settled in okay. He has been keeping us very amused by checking himself out in all of the mirrors in there. He seems to think that there are at least half a dozen rather good looking boys with him...I wish!. At least he won't feel lonely.

Sorry no photos of the newcomers as it was dark by the time that they arrived. Hopefully I will be able to get the camera out tomorrow. First on the list of jobs will be injections; Cydectin to cover for worms and mites. We will also collect faecal samples to be sent to the VLA. St. Pat has already tested negative for Emac but has had Boycox Bovis as a prophylactic measure as has Amanda's two girls. Lady G who is in her early stages of pregnancy will be tested rather than treated unnecessarily.

Reluctantly I decided that we should just let the newcomers settle after their long journey, but I can't wait to get my hands on them soon. Hopefully exciting times ahead!

It has been rather chilly here today, so it might be a bit of a shock for poor St. Pat who had a major short back and sides in quarantine. September is rather late to be getting such a close shave prior to a Cumbrian winter; especially when you have come from the Australian sunshine. 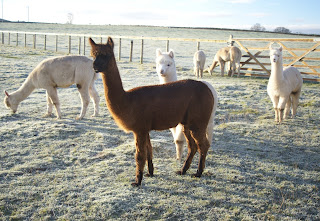 Pepsi Lola : A frosty start to the day.
Velvet our Cocker Spaniel / Jack Russell Terrier cross (a Jocker)﻿ appears to be still growing into herself. We seem to be having ear problems at the moment. She obviously doesn't  realise that she has Spaniel ears and that she needs to shake her head now and again to keep them in position. See below: 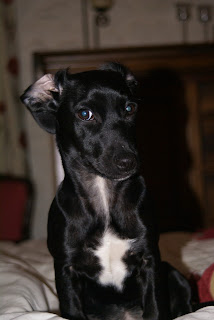 Velvet posing on our bed...doesn't appear to have noticed the ears!
Posted by Unknown at 20:07