Friends of the earth?...Legacy and Snowstorm go green...

With non-stop rain here and more forecast, we decided to move the girls on to drier land yesterday. Although we did get the 'hay field' drained a couple of years ago, it is still the wetter of our fields due to the clay in the soil. So the girls were moved back across the lane and out of sight of the boys.

Now, despite the girls being quite happy about the move...somebody was most definitely not...screeching could be heard...I expect for miles...as Legacy took his frustration out on poor Snowstorm. Poor Snowstorm (a Suri) came as Legacy's companion and "best friend". Mis-named Prince Snowstorm, the poor boy has a life of subservience. Although, judging by the photos I am not sure who came off the worse on this occasion: 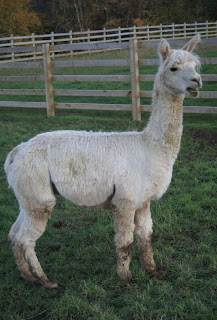 Prince Snowstorm...a wether and our only Suri 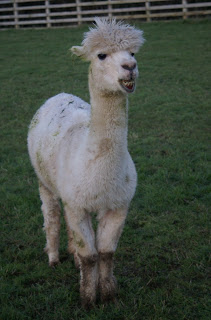 Legacy of Purston...looking like he came off the worst...stud male or not!
It looks like Legacy, who is always keen to work, may have a bit of a frustrating time ahead. With Hollywood's Attitude working; two other young boys ready to work in the spring (Anzac Almost Illegal and Viracocha Black Sabbath); and the purchase of a new male (more soon); it looks like he will not get any work here at Beck Brow next year, mainly due to the limited amount of females available. We are now trying to decide whether to put him up for sale﻿, offer to lease him out, or let him retire and be our spit off male. However, it does seem a shame with a micron of 25.3 um at 11 years of age for him not to be working.
I have been back up to Scotland this week; the scenery is starting to look very familiar. Amanda came with me on a day out visiting weavers and manufacturers in the Borders. Tyke came along too and was made very welcome everywhere. I will probably be remembered for the smallest dog seen in a waterproof! It was rather wet! A successful day out; I think we have decided on who will be making what for us. Very exciting!
Velvet was left at home on this occasion. Two dogs might have been pushing it. Velvet just takes herself out of the cat flap when she needs the toilet which makes life rather easy. Tyke who is half her size and 4 years old has never figured that one out. Maybe just as well as I am not sure the garden fencing is Tyke proof!
Posted by Unknown at 08:16