Mixed reviews of the accommodation and staff!

St. Pat has settled in at Beck Brow as though he had been here for years. Being fairly recently shorn, and not having had the use of a shelter in the past, we did wonder how he would fair up in the frozen North. But no worries, he loves the indoors...I found him this morning happily munching on the hay in the shelter...not even a crystal of frost on his back...this boy likes his comfort! 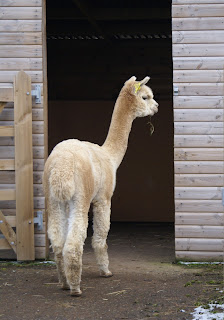 Checking out the accommodation.... 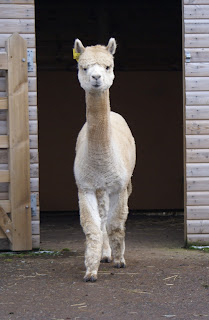 Giving it 4 stars...would have been 5 stars but just lacking the log burning stove!
We were going to call St. Patrick Paddy for short (Shirley's comment yesterday) but he does know his name as St. Pat. so we will stick with that. Now that he is here he doesn't seem like a Paddy anyway.﻿
The girls appear to be less impressed with their barn and had obviously spent the night outdoors. I couldn't even persuade them to come in for their breakfast this morning. I will give them another day to settle then if they are still reluctant I will consider putting one of our maidens in with them to give some guidance. Nina is top of the list at present as she is independent and calm.
Lady G. whilst looking very sweet and dainty, has a definite air of one who considers themselves to be of a superior class. She gave Amanda the haughtiest look I have even seen...and that's saying something when I own Hoity Toity!...she looked her up and down...and obviously found her wanting...no way to treat someone who has come to help with farm duties...I think it was the work boots that she didn't care for!
﻿
Posted by Unknown at 16:47