It was an early start yesterday for a trip up to Scotland. Plane Castle near Sterling is the venue of this year's Scottish National Fleece Show and judging commenced on Monday. With 280 plus fleeces entered, all to be weighed, details checked, judged, results filed, rosettes awarded and then the fleece returned to the correct owner, it had the potential to be a logistical nightmare. However Jonathan (Russell) and Debbie (Rippon) had everything well under control and I just mucked in for the day.

The level of entries makes this year's Scottish National Fleece Show the largest fleece show in Europe. Judge Cameron Holt has attracted not only a record number of entries but also entries of a very high quality. Winners will be announced on Saturday at a celebratory dinner in the castle (tickets still available).

Whilst I was away Paul managed to fix the puncture on the poo-picking machine. I should point out that there is nothing wrong with using a brush and shovel....although my technique of spreading is not a good one it has to be said.... this is a user problem rather than an equipment problem...however, when I say that Paul spent three hours in the girls paddock and has left some for me to finish off today, you can see why the idea of hand cleaning was a bit daunting!

Paul somehow managed to end up with a gash on his head whilst on poovering duties. He claims that he accidentally managed to hit himself with a piece of wood. Now...I know how much he hates paddock cleaning...surely he wouldn't have to beat himself with a stick to complete the task?...mind you three hours.. that would turn anyone crazy!!

All the talk of fleece yesterday reminded me that I hadn't checked out the results of our fleece photography from Sunday properly. Beck Brow Explorer gets a lot of attention around here. As one of the first EP Cambridge Navigator cria to be born we are all interested in monitoring his progress. Navigator was sold for AU$ 150,000 as a multiple supreme champion winner. However, with no progeny on the ground at the time, he was an unproven male; So Explorer really is an interesting prospect. 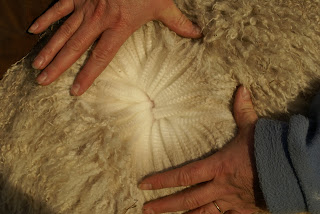 We managed to get a top/midside fleece shot that shows his definition fairly well but doesn't demonstrate that amazing brightness that really makes you go wow when you open his fleece (click on photo to enlarge). I guess outside on a dull day wasn't going to capture that. However, it is possible to see that at 4  months of age he has good length and density. 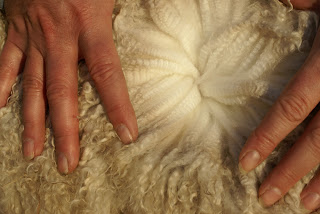 This shot of his rump shows the brightness a little better...we just appear to have missed the target!
﻿We have a long wait ahead of us to see if he makes the grade to become our next white herdsire, but we will enjoy watching. In the meantime he manages to keep us very amused with his grumbling and gurning (that's pulling faces for non-Cumbrians...we are famous for it here!).
Posted by Unknown at 07:41