The rain is so bad here today that we have had a weather warning. Slim chance of seeing any bales of hay this year I fear! We do have enough hay left from last year thankfully. Obviously not our first choice but at least we have supplies and we do give a regular vitamin and mineral drench to our herd. Cutting the hay field was definitely Paul's decision!

I have been trying to get a shot of Explorer's fleece this morning; not easy to open the fleece and point the camera at the same time. He did stand pretty still but I still managed to get a blurred image due to me moving about rather than him. The photo does not do him justice but you can just about catch the brightness. He is a mass of very narrow staples which doesn't show in the picture; but what I hope is  particularly promising is his coverage of crimp from top to toe. 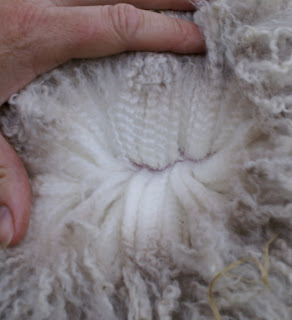 Beck Brow Explorer at 2.5 months
I think that predicting cria quality at such a young age is a real skill and must come with years and years of experience and the opportunity to see vast numbers of elite cria (I have a way to go!). I remember visiting Anzac Alpacas and witnessing Dominic Lane at work. He showed us two very young cria both from elite dams and who shared the same sire. Although both looked 'pretty darned good' (have you got the Aussie thing there) he could instantly say one was a future stud male the other a pet. He was right of course.
It was this ability that persuaded us to purchase Anzac Almost Illegal (a medium fawn male) at six months of age. Apart from his fleece style it was his fineness that had impressed Dominic. Second fleece stats for Almo:
MFD: 17.2       SD: 4.50         CV: 26%        >30um: 1%
Not a bad prediction. Meanwhile I will keep practicing and testing my findings!
I have been trying a little halter training over the past couple of days. Yesterday we seemed to be in reverse gear for much of the time. Although she is weaned I think that I may be starting a bit too early. I also have poorly fitting equipment which is really not good at all! 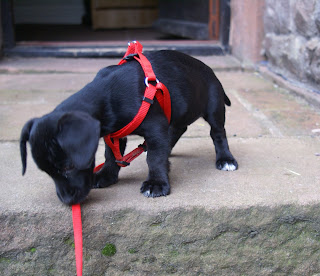 Velvet...still time to grow into the harness
Posted by Unknown at 10:48