Puddles inside and out....

Raining doesn't go anywhere near describing the weather here in Cumbria at the moment. It is torrential... It is constant...It is just plain miserable.

Not an alpaca in sight when I looked out this morning. Now the girls are known to be rather keen on their shelters but the boys normally tough it out. Not this morning.

No hay for us this year. In fact not much hay for anybody around here. We are now just waiting for the cut grass to be removed from the field. It is the first time that we haven't managed to get any of our own hay; it was bound to happy eventually I suppose.

The wet weather is doing nothing for Velvet's toilet training either. Not very keen at going outside in the rain we have a a few puddles on the kitchen floor...this usually entails a change of socks...thankfully we do have stone down rather than carpet!

Paul and I braved the weather to do some poo picking yesterday. What looked like a shower turned in to a downpour. With neither of us willing to wimp out we carried on soaked to the skin with the alpacas watching us from undercover in the barn!

Like Mark at Patou Alpacas we are rather excited by the Australian imports arriving today. Not quite on the Richter scale of Mark as we are not collecting a fabulous new stud male; but we are looking forward to the arrival of Waradene St Patrick. St Patrick is a mid fawn male who will be joining E.P Cambridge in Wiltshire.

Why the excitement?...Waradene St Patrick and E.P Cambridge Lady Gaga have a date...we have kept her waiting but we are rather hoping this will be a perfect pairing. St Patrick has a good depth of fawn in his pedigree including Purrumbete Inti so fingers crossed we could get the desired elite fawn cria next year! ...But the real excitement...I will hopefully get her here at Beck Brow before the end of the year. It has been six months since we saw her last. I believe her fleece is in the post so at least I will feel a little closer!

It really hasn't been the weather for photos over the last couple of days. However Kenzie has decided that he rather like the camera. 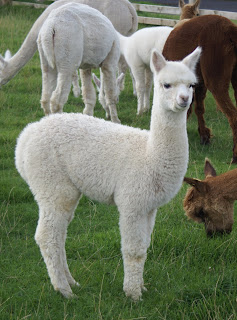 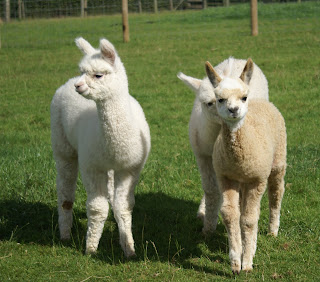 Kenzie trying to spoil Nutmeg's pose. Noah (left) keeping out of it!
Posted by Unknown at 09:19