Bravery awards for all...

Well what a start to the day; This morning I went downstairs to be greeted by a bat sitting on the worktop. Now I am used to finding headless rabbits and bits of mouse lying about the house thanks to Sam the alpaca cat, but this looked a bit scary. I opened a few windows and pointed then out to Mr Bat but he was obviously as blind as… In the end I managed to remove him from the premises with the aid of a cereal bowl and a chopping board. All in one piece I should add. He flew off happily and I felt rather pleased with myself...no screaming at all!

Drama number 2; an alarm call from the boys paddock. Now Nimrod can be a little highly strung, his high alert call usually just means that a stray cat has looked at him. However on this occasion the boy did well. I looked out and I immediately saw that Julius was in some kind of trouble. He was down on his side and wasn't for getting up when I called. Nimrod was screeching and keeping the other boys away from him (a very green scene). When I got closer I could see that Julius had somehow managed to get all four legs tangled in the wooden gate. Now I know this is sounding like an episode of Skippy the Bush Kangaroo (need to be middle aged to understand that one) but my heart was racing.

Nimrod had got himself into such a frenzied state I wasn’t sure that he would let me near but he was fine. I managed to get Julius freed and couldn’t see any obvious damage but he was clearly rather sore. He got a shot of Finadyne (anti-inflammatory) and I will keep an eye on him. But what a hero Nimrod turned out to be. He and Julius have always been inseparable but alpacas still never cease to amaze me. Maybe Explorer will rescue me from the beck one day after all!

Taking of my boy; he and Roma appear to have become very good friends since their trip out together to Fowberry Alpacas. The concern is... is Explorer having a negative influence on Roma? I am sure that they are beginning to look alike: 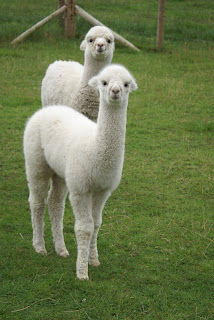 Roma trying out the Explorer look...just the right amount of grump! 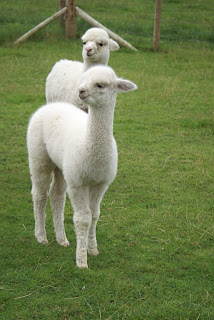 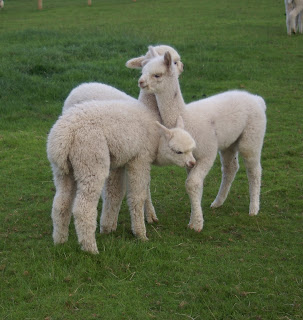 I'm not sure if Noah was trying to undertake some kind of initiation test in order to join the group this morning; maybe the task was to steal a drink from Galaxy as Kenzie had done? Whatever, Galaxy was mighty mad with him: 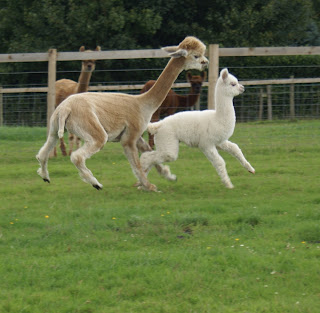 Phoebe has had her last injection of florenfenicol (Nuflor) this morning. Her tooth abscess seems to have gone completely and the hole is healing over. I decided to complete the full 6-week course just to try to ensure we don’t get a recurrence as we did when using Amoxypen. Phoebe is very strange in that she much prefers to be injected intramuscularly (IM) rather than subcutaneously (S/C). She makes a real fuss about S/C injections but doesn’t even flinch about IM injections. Phoebe is not your average alpaca it has to be said!
Posted by Unknown at 13:56