Spot the difference....surely the next one can't be white?

Two days of sunny weather. A night of pouring rain in between...all hope of seeing any bales of hay continues to fade. At least the alpacas have enjoyed the sunshine.

I caught Nutmeg and Finnian cooling off by the water trough this afternoon. It did look like they had dozed off. Definitely chilled out. I'd have a bet that Nutmeg is going to be a dunker: 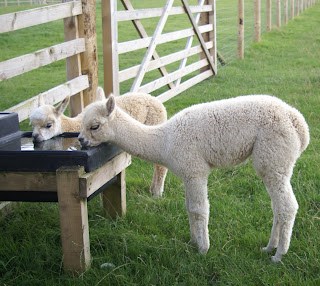 Nutmeg & Finnian
Baheti is looking pretty fed up now. The last of the girls due this year she is spending most of the day just sitting about. With Baheti the anticipation is about whether she delivers a male or a female cria. I have a feeling that I can predict what it will look like. She has had two daughters for us so far both to black males. Spot the difference: 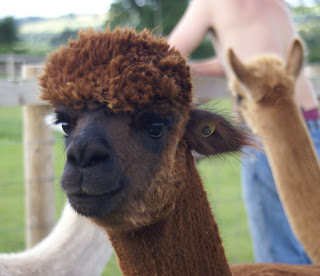 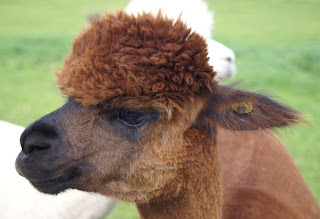 Pepsi: Baheti's 2010 cria.
As Baheti is again pregnant to Blueberry Sinbad Holly (Pepsi's sire) I am guessing we won't be getting a white cria but hey who knows!
Willow (born 2009) is one of my favourite girls not only is she very gentle but for me she is the perfect colour; dark fawn. Dam...white! 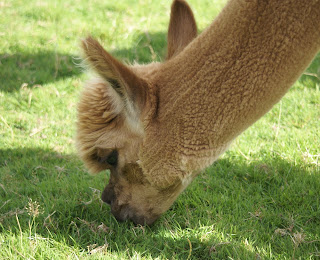 Willow.
Thankfully all of our females mated to stud males not owned by ourselves continued to spit off yesterday. Only Blanche sat. We mated Blanche at two weeks postpartum when we normally wait three weeks. We really must stick to our belief that three is a more successful time frame. We have now lost a week instead of gaining one as Blanche spat off at ovulation so is now four weeks post Nutmeg. I know lots of breeders only wait the fortnight but any failed matings for us have generally been the early ones despite the dams having been keen.
Posted by Unknown at 16:53