Plenty of Sunday jobs on the list as always:

Nancy the young maiden who didn't have the easiest birth, and appeared rather shocked to have produced a cria, is now 3.5 weeks postpartum. We decided that we would give her a little time before remating as she wasn't looking particularly keen when the other girls were with the boys. Most of our girls sit eagerly (ready to be mated) very soon after birthing, but we do make them wait for at least 2 weeks. As a general rule we remate them at 3 weeks (or even 4 weeks post birthing depending on the circumstances of the birth). Nancy did sit for Hollywood, but it was after much consideration. She obviously wasn't sure that she wanted to go through that again. Hopefully it will be easier next time Nancy!

We also had eight spit-offs to do. Nobody sat to be mated so fingers crossed for pregnancies. Camilla and Galaxy would both appear to have ovulated and will be spat off again next weekend. As we now have most of our girls due June and early July next year, it would be great if they could keep our dates tight.

Bev and Andy came to visit us from Yorkshire on Sunday. After a pub lunch it was down to some work...well after a bit of cria inspection! The boys and the maiden girls were all due their annual Lamivac, so it was an ideal opportunity for Bev and Andy to give some injections under supervision, in readiness for when they get their boys. Both are very calm and confident around the alpacas and had no problems with the handling or injecting at all. Top marks!

All the older cria got an oral vitamin and mineral boast which gave us all an excuse to handle them again! I had hoped that they would put on the cria early evening performace for Bev and Andy, but it wasn't to be (Amanda had had a early showing on Friday). However, I did go back out at 8pm to catch the late show! 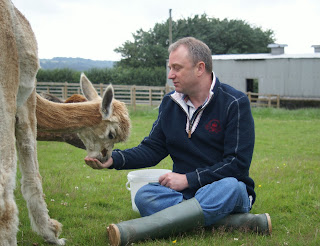 Andy with the magic bucket...it makes Galaxy appear out of thin air!
Finnian was dying to get up to mischief but nobody was up to playing with him. When I went out later he was having to settle for chewing Holly's ear; he had already tried Nutmeg's ears without the desired response! 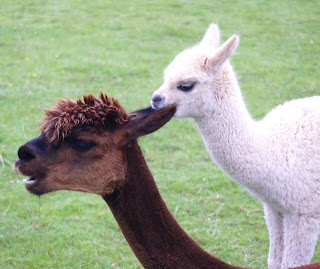 Finnian...only a mother would put up with  it!
Debbie's comment about our average gestation times for our girls this year, prompted me to get out the calculator last night (I obviously need to check my additions as Blanche was only 323 days not 329!). With Camilla's 385-day marathon included our average for the year so far is 343 days. Without Camilla our average stands at 337. So after a slow start nobody else has kept us waiting long. I also had a check on our average birth weight for the year. Little Nutmeg at 6.7kgs is by far our lightest of the year and has brought our average to 8.25kg. So some pretty healthy weights so far. It is only when you see Nutmeg that you realise how quickly they grow: 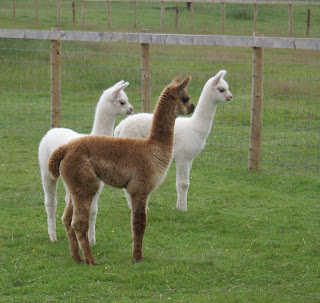 Front to back: Parisien, Lucie and Tabitha 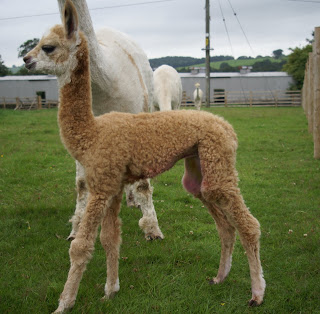