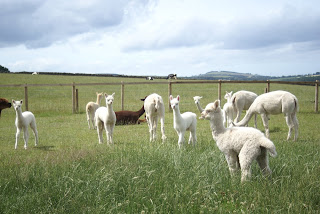 I am pleased to say that Explorer has been on slightly better behaviour today. Although, he did decide to use the poo pile just as I was taking a photo with most of the cria in sight!

Katkin has been playing with all the youngsters today. She does get herself rather excited and starts jumping up in the air and kicking out. I just had to look away and hope all the cria ended up in one piece. They all appeared to be having a good time anyway.

I did get news from Cathy at EPC today; Lady Gaga is well and has now been renamed Aunty Gaga, due to her looking after everyone else's cria. Ahh...hopefully just four weeks until she can be mated with St Patrick.

I had hoped to enter her fleece in the GWR fleece show but it looks like I will be too late. I have another couple of fleeces that I am going to show at some point, but as the animals were purchased from the judge of the GWR show, I thought that I wouldn't put him on the spot..."I thought you said she was a show winner"!!

Talking of fleece I got this year's fleece stats back a couple of weeks ago. I try to guess the results prior to sending them, just so I keep practising what I was taught on the BAS courses. I won't go into loads of figures (we were happy with the results); However what I though was interesting was Camilla's fleece. I didn't actually look at the individual fibre when trying to guess Camilla's stats; she has one of those fleeces that you just want to snuggle into when you handle her. I assumed that it would give similar results to Honaria's, although I would probably just have favoured Camilla if pushed. Result: Camilla's MFD was nearly 4 microns higher than Honaria's, who had actually dropped hers from last year, but Camilla has a CV of 18.1. Confirming the influence of low CV on handle?

The only disappointment of the week so far is Minnie. Minnie the friendliest female ever is obviously pregnant. No need to do spit offs...she resolutely ignores us now that she has been mated! The good news is that her half sister Tabitha looks like a hopeful for taking her place on the sociable front.
Posted by Unknown at 16:47