Explorer gets a master class...and puts the theory into practice!

Our weekends have been so busy of late, so much so that I never seem to have the energy to write a Sunday evening blog; So here we are again with a Monday morning report.

I have just realised that I forgot to buy any bread yesterday; so I have had to have left over cherry cheesecake for breakfast! If you notice things getting a little silly as I go along it will be the sugar rush kicking in (at least I've had a portion of fruit with my calories).

We have had a lovely weekend, largely due to our good fortune to own alpacas. When we bought our first girls we anticipated that they would bring us much pleasure. Their inquisitive nature, their calm, and eventual trust, makes them a delight to be around. However, one of the additional bonuses to ownership that we hadn't considered, is that we have met and become friends with some fantastic people along the way. We have had a couple of AA meetings (Alpaca Addicts) this weekend, just to keep the levels topped up. There can never be too much alpaca chatter!

We enjoyed catching up with Michael and Judith from Cockerham Alpacas on Saturday. Michael has made some very good breeding decisions and is continually improving his core herd, so I always appreciate his opinion. I was keen for him to check out Explorer. I think he passed the test (Explorer not Michael that is...although Explorer didn't give any feedback!). I realised that I probably enjoyed one glass of wine more than I ought to have, when we were up early on Sunday morning.

Camilla and Galaxy had a date with Top Account at Fowberry Alpacas on Sunday. Galaxy got the before lunch activity and Camilla the p.m. date. Explorer was taking great interest in TA at work, but was generally on his best behaviour away from his own turf. He did have a little grumble when he got kicked out of the mating pen for being a pest though.

It was lovely to see all the cria at Fowberry and to get a look at some of Top Account's progeny fleeces (fantastic). Jenny and Graham are always both inspirational and encouraging. I always leave feeling so positive. The Silverstream Czar (Galaxy's sire) and EPC Top Account (sire Jolimont Commisario) combination is an exciting prospect. I know; I haven't even got past the first spit off, but it's good to be a glass half full type!

We decided to do some mating when we returned. Both Legacy and Hollywood got an outing. Explorer was back to his old ways when back at Beck Brow and was trying to mate everyone whilst Hollywood was at work. The poor boy is going to have a long wait before he gets any real action. However, we are hoping that both Anzac Almost Illegal and Viracocha Black Sabbath will be working next year.

I have just received some photos of Viracocha Black Sabbath from Dominic at Anzac Alpacas. This is a black male that we co-own. With Cedar House Amar as his sire (g.s.Snowmass Grey Legend) we are hoping that he will add some top quality coloured genetics into our herd. Shame that Dom hadn't given him a dust down before the photo call! 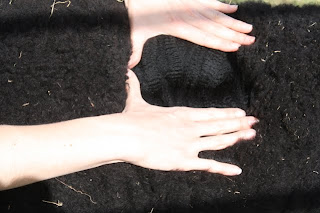 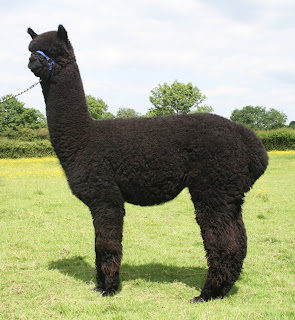 Viracocha Black Sabbath (just before shearing)
Now, I am supposed to put these on the website but this appears to be a technical step too far. I will have to admit defeat and seek I.T. husband support!
Posted by Unknown at 09:07