I don't think anyone ever believed me when I said that I wasn't going to be going to the alpaca auction at our local auction mart. However, I had already planned to go to Hope Fleece Show. I had entered a number of fleeces this year; the main reason being that I wanted to have them judged by Liz Barlow. It would also be useful for my training to see the scores and assess them against the other entries.

A good plan...but Hope is a long way away...and the auction mart is 15 minutes away...it would be good to catch up with everyone after all. So, off I went in the van (good marketing I tell Paul, after all it has our logo all over it). I also take the cheque book (you never know when you might run out of diesel). Well, prices were low, but the female that I had my eye on, was obviously the one that everyone else had their eye on. Hence, I ended up buying the most expensive alpaca lot of the day...again!! (and by a hefty margin too).

I have added to our Blacks with the purchase of Ardo Jet. She is a lovely little compact female, who is pregnant to Lavender Park Zarathrusta. Zarathrusta, who is dark fawn, has some very impressive genetics (he has a similar pedigree to our St Patrick) which was an added bonus, but she has been bought with Black Sabbath in mind. Black Sabbath has retained an impressively fine micron of 20.1 on his 4th fleece and I felt that we need some more girls for him to work on!

Jet is incredibly calm and has slotted into her group really easily. She is definitely not showing any signs of being stressed by the auction experience. Coming from a Scottish breeder, she is from a bTb free zone. She has been wormed, and introduced into her group of pregnant- none nursing females. 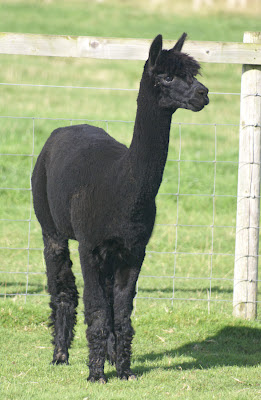 So I now have the excitement of waiting to see if any of our Beck Brow fleeces were placed at Hope Show. I am getting them posted back so at least I will see the score cards.

We had the vet out today scanning and microchipping (I am going to get braver and do the microchips one of these days!). We had 12 scanned, all were pregnant. Most of our females are yet to be mated, or are under 6 weeks gestation. We have had problems getting some of ours pregnant this year, hence why we are running late. I mentioned this to the vet and he reports the same amongst horses and cattle...he was blaming the wet weather.

Thank you for all the advice regarding the doves. I can see the pigeon problems has arrived sooner than expected. We now have a funny looking breed of male, obviously a pigove by the look of it, who is on stand-by waiting for them to be released. I can't believe that he has arrived out of nowhere. He is mainly white with patches of brown (more dove than pigeon, but definitely a cross). What to do...I can't have him mate with my pure white doves! (I know all answers involve cruelty, unless I let him have his way)

I have sold something on eBay for the first time today. I kg of superfine grey alpaca fleece....£31 + postage...how good is that!
Posted by Unknown at 15:31