A cria out and a prolapse in!

Fallowfield Minerva (Minnie) was one of early alpaca purchases and is amongst everyone's favourites. She has secured her place in our herd for the rest of her days, due to her being the friendliest and sweetest little female ever. Consequently there was a little trepidation when she went into labour yesterday, after all she had a terrible time birthing last year and we eventually lost her cria. However, she managed no problem at all and is as proud as proud can be. However, he did have a bleeding umbilical cord (as did her cria last year). You can see the clamp in the photo. 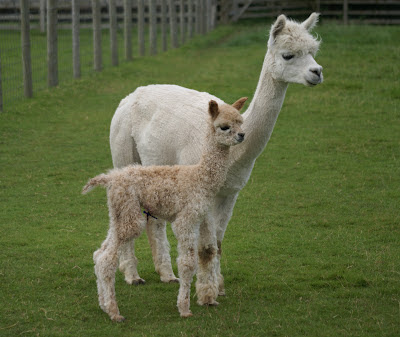 Minnie and Marco at 3 hours old

We have called him Marco. Hopefully we won't have too many more males as I will be running out of names ending with o. I know... most people have a theme with names starting with a certain letter of the alphabet not ending with one...I like to be different. Talking about different...our cria certainly aren't...St Patrick is certainly stamping his head style on them! 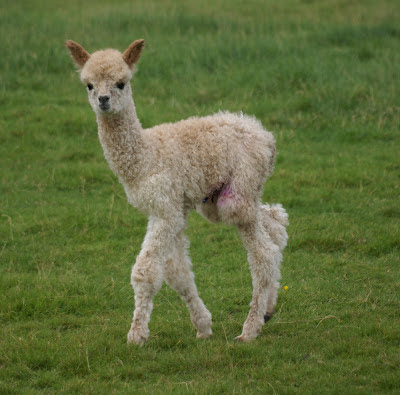 We had to get the vet out this morning as Beck Brow Lucie had a prolapse that just wouldn't stay back in. She is 366-days gestation today, and has looked like she has been going to birth for over a week now. The solution was to use the same device used for sheep...the problem was where to tie it on a shorn alpaca (it is usually tied to the sheep's fleece)...of course the answer is simple...when in doubt use baler twine! 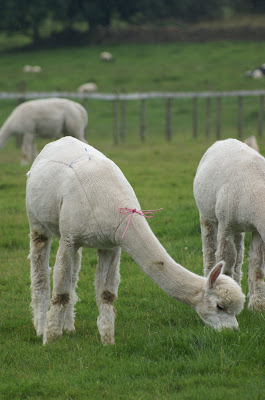 Beck Brow Lucie (sire EPC Top account of Fowberry and pregnant to Waradene St Patrick of EPC...should be worth the waiting!) 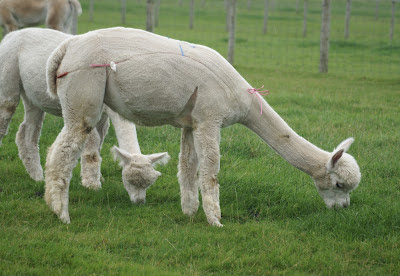 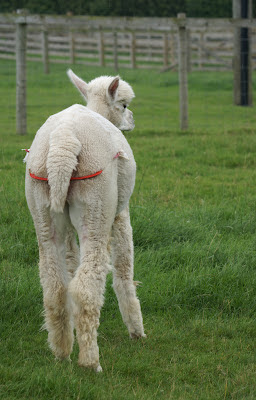 Yesterday we had a visit from Bev and Andy (Lane House Alpacas) who arrived when Marco was just over an hour old. It was lovely to see them both and catch up. We had the usual Friday conversation; what we would all do if we won the Euro-millions (most things involved alpacas!) but it's dream on I'm afraid!
Posted by Unknown at 13:17