We have had a busy few days, with plenty of excitement, and a night shift at the hospital; so I am in my usual state of not knowing what day it is!

On Tuesday I received the results of our entries into the Hope Fleece Show. As I said on the last blog, the impetus for entering some fleeces was to have them judged by senior BAS Judge; Liz Barlow. Not only do I value her opinion highly, but I also wanted to test my own assessment skills against the marks given. With this in mind, I hadn't given a great deal of though as to which classes to enter, and ended up competing against ourselves in a couple of them;

It really doesn't seem very long ago; that I thought white classes were of such a high standard, that we would never be able to compete!!

All of our fleeces were placed. 1st - EP Cambridge Lady Gaga (beige ), 2nd - Beck Brow Synergy (beige) and 4th - Beck Brow Boots (fawn) as anticipated her fleece had no weight to it due to a poor start.

After all that excitement; we also had a birth. Silver Stream Hoity Toity, who was well over due, had decided to pass on the sunny days over the weekend, and opted for a period of torrential rain. Typical Hoity Toity!

She did come in to the barn of her own accord and her waters broke as she was munching on hay, which seem to come as a bit of a surprise to her. She then decided to stand on the weighing scales and start to push. Then she chose an area more commonly used as a toilet facility. So, in order to tempt her into the birthing area, and thus on to a straw bed...I put out a bowl of feed...with the cria's head and legs out...Hoity leisurely munched away on her food for 20 minutes (she is a very slow eater)...seemingly oblivious to being in labour! She was obviously waiting for a bigger audience, as half an hour later and just as Amanda arrived, she decided that she would resume with trying to birth. With success. She then continued eating!

We have yet another male, but first impressions are good. Hoity is a Silverstream Czar daughter, with Jolimont Conquistador on her dam's side. The cria's sire is our Waradene St Patrick of EPC, so he has the credentials to be something special. I am pretty sure he is beige (but hey I said that about Advantage!!). The photos taken of him today, are at less than 24-hours old. Weighing in at 9.5kgs he is a chunky monkey. I have decided he shall be called Testimony...it just seems to suit him! 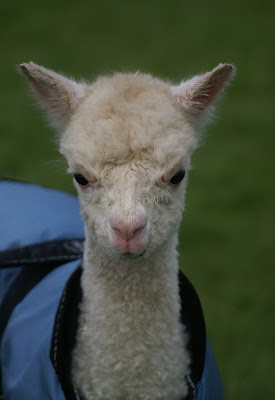 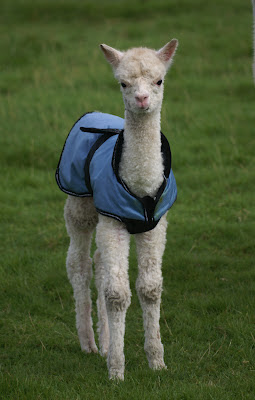 We only have one birth left to go now; that is Beck Brow Fine Romance (Roma) who is a daughter of Silverstream Galaxy, and thus a Czar granddaughter. I am hoping she might oblige tomorrow, St Patrick is off on a visit to Wales on Saturday, but unless Roma births before then, it looks like I will be staying home again!
Posted by Unknown at 14:53