This is going to be a blog sandwich...I have started with a pretty photo of Adelle so that other bloggers don't have the next gruesome photo on their reading list...I am going to finish with a cria photo...but the bit in the middle is not pleasant I suggest that you skip this blog if not an alpaca breeder. 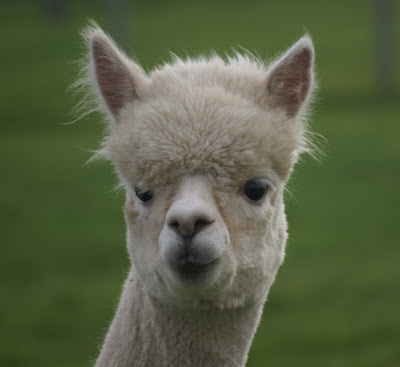 Adelle looking as pretty as ever.

Yesterday was not a good day. Some of you may recall that the lovely Lucie had a small prolapse at 366-days gestation. We managed to attach a spoon device (using lot of string) to hold this in, and with the aid of anti-inflammatories and antibiotics things seemed to have resolved by the time the spoon fell out.

However, a couple of days ago the problem recurred. At this point she was 376-days gestation. The spoon did work, but we had problems keeping it in place (normally sheep are in full fleece and there is somewhere to tie it to) It was suggested that she was stitched, and at the first signs of labour this was to be undone. However, I wasn't sure about this. Firstly she has looked like she is going in to labour for days, and secondly Paul was away so I was going to be on my own.

But something needed to be done. As you can see in the photo; Lucie's tail was rubbing on the prolapse, it was getting dirty and attracting flies. She was having continued antibiotics but I felt that we were putting Lucie at risk. 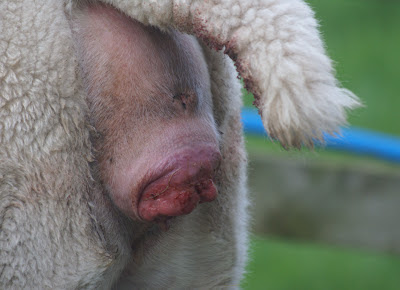 So after spending all night deliberating, we decided to have her induced. This was my call and I knew that their were risks involved so it was a difficult decision.

The placenta is retained - this is a known risk and we had Oxytocin pessaries and injections ready.

Dystocia - this a problem we had with 2 maidens who went over 365 days last year - we lost both cria so a risk anyway.

Lucie was induced at 12.15 on Tuesday. We were told to expect to wait 24-36 hours for her to go into labour. She went into labour at 18.00 hours yesterday. Amanda was here to help thankfully, as we realised things weren't progressing. I felt inside and couldn't locate the second leg and the cria felt huge. The vet was called (unfortunately the do not live close by). It was a struggle as the leg was well back and the shoulders were so large (Lucie was found to have a fairly narrow birthing canal). Unfortunately the cria was still born, dead less than an hour.

Now we have gone over and over this. Was the dystocia due to the induction? Or would this have happened anyway (as happened last year with overdue maidens). The vet said if the cria had been left to grow any bigger she wouldn't have been able to birth it at all. As it is she has a tear. I think the big lesson learned is that I have to hone my midwifery skills. If I could have corrected the leg, we would probably have a live cria. The after birth was passed without problem and she is on long acting antibiotics. Would I induce again? I don't think that I would dare to take the risk.

Poor Lucie. The vet thinks that she maybe at risk of prolapsing again if pregnant. It is a difficult one as alpacas do seem to get over their loss much better when remated. Our farmer friend has suggested leaving a little thigh fleece on for next year, so there is somewhere to tie the spoon if it does happen. This maybe the best solution for her. We will see how she does.

Lastly on a happier note...what a difference...Lexus at 2 months-old and Paulo at 2 weeks! 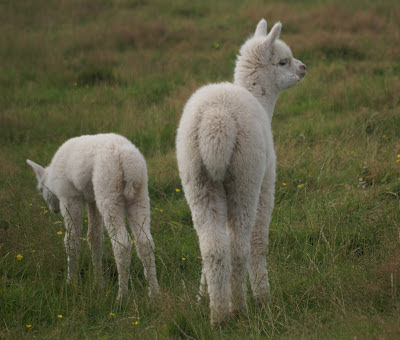 Beck Brow Paulo and Lexus
Posted by Unknown at 15:01