A busy time...no time to think of an interesting title!

It's been a busy week so far...Paul is having a week off from the day job...but not much rest! We have had another birth. This one belongs to Robyn and Craig, a lovely white female named Young Punk Angel (I did say when they were choosing a herd name; think of something memorable...so I only have myself to blame!) This will be our last cria from Anzac Hollywood's Attitude (now owned by Swinden Rise Alpacas in Lancashire) and what a lovely strong girls she is (9.4 kgs) with a remarkably long fleece. 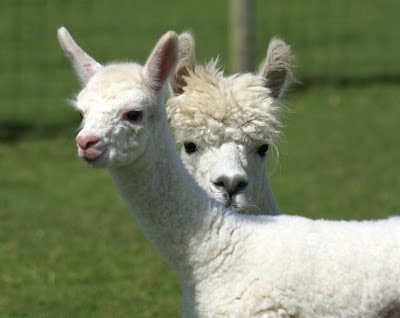 On Monday Beck Brow Explorer had two mobile matings in North Yorkshire...he is just a youngster so it is always a worry that he might not perform away from home. But no problem...he is so very polite about his matings and does a little courting first...but does eventually get on with the task in hand. He was so well behaved I was proud of him...as a mum should be!

We have been doing some spit-offs at home, and were disappointed to find Bahati sitting. Our plans were that; as one of our best coloured females, she would have an outside mating in the hope of getting an unrelated stud male. A long shot, but even more so when she isn't getting pregnant. It was especially disappointing as she had been mated to the impressive, championship winning black male Popham Thunder.

Beck Brow Snooty Boots is a little full of her sell since her visit to Fowberry Nobility, and was trying to elbow her way into the mating pen. Fingers crossed that that mating has taken as we have high expectations for that combination!

Viracocha Black Sabbath has continued his 100% first mating success rate. We have now mated Bahati with him as time is passing along and we left her open the year before last to get her on to a spring cycle...we are now August!! We will carry her outside mating over until next year (or possibly use it on her daughter Pepsi we will see).

We have growing competition on the cute stakes here at Beck Brow this year. Some later additions include: 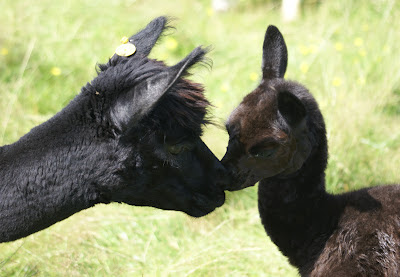 Biba with Beck Brow Kitten (she is black) 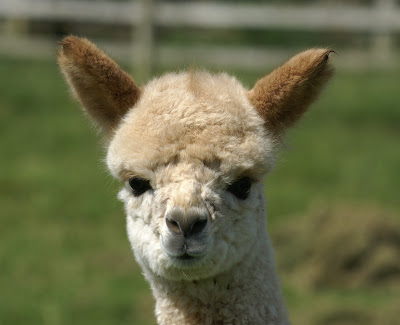 We have named Renatta's little boy Paulo as suggested by Shirley (thanks Shirley Paul was nearly happy!). Thanks also to Andrew for the Wikapaedia link to names ending with O!

I am preparing myself for a game of tennis tonight (preparing myself mentally...not physically, it is too late for that). I have not played for at least 3 years. Paul must be desperate for a partner, as I am on the reserve list of his reserve list! If I stand near the net at least I will block out some light. The last time I played I ruptured my achilies tendon...hence why it was the last time I played...so if I don't write another blog for a while it is because I am on crutches!

Right must go some visitors have arrived to see the alpacas and more due tomorrow and Friday...great fun...and the sun is shining!
Posted by Unknown at 14:31