It has taken me a couple of days to feel able to report on the dreadful day that we had on Friday. Poor Max had obviously had more going on than I anticipated. We managed to sort out his constipation on Thursday evening, however he was refusing electrolytes via a bottle but was drinking from Mum, we were concerned but didn't think he was in anyway critical. However, on Friday morning, he was kushed but lethargic, and fearing dehydration I called the vet to administer some intravenous fluids. The vet started an infusion of Hartmans solution. However, as the flow rate was slow she decided to top him up with some intraperitoneal Hartmans, and planned that she would return in an hours' time with a correct size cannula, and to perform a full examination (she had received an emergency call out). Unfortunately the vet had only been left no more than 5 minutes, when Max suffered a seizure, his breathing became extremely laboured and he went into respiratory arrest.﻿
Little Max had to fight for his life when he was born. We all fought so hard to keep him alive and he really did love life. A dreadful shame and we are mighty sad. Thankfully Minnie is absolutely fine. It has to be said she appears relieved...did she know more than us...I suspect so. RIP Marvelous Little Max.
On a happier note we are pleased to have introduced some lovely new owners to the addiction that is alpaca breeding. For although there will always be some lows (and I don't think anyone ever hardens themselves to the loss of a cria, or indeed any beloved animal) there are many more highs to owning and caring for such beautiful, inquisitive creatures, that are alpacas.
Richard and Lesley have purchased a ready made alpaca family in the form of Katkin and her 2 daughters; Parisien and Katie. Katkin is already pregnant to Waradene St. Patrick of EPC and Parisien will be mated to him very shortly. The girls are to stay at Beck Brow on livery until Richard and Lesley have made some alterations to their land and a shelter has been built. They will also be coming for plenty of hands-on training prior to taking the girls home. 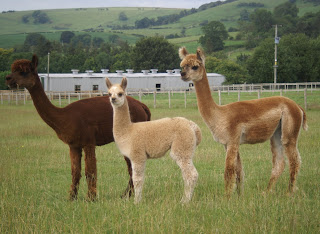 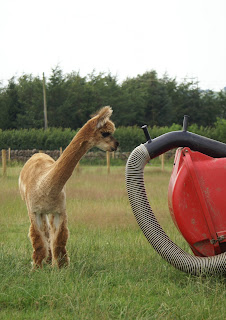 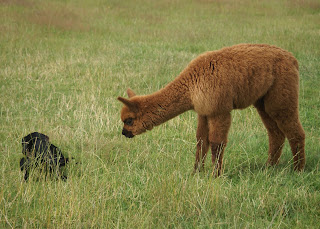 Velvet trying to stay as still as she can...Satchmo falling for the trick!
People often ask about "how ﻿can you bear to sell your alpacas?"...well it is hard... but there is also pleasure in sharing. Sharing knowledge and sharing the pleasure of alpaca ownership...and of course making lovely new friends. Last night we had a visit from Bev and Andy (owners of Fin, Kenzie and Noah) and had a meal down at the local...Yes...the downs are tough, but the highs are many.
Posted by Unknown at 18:28