Well there is no point trying to be mysterious about our purchases at the auction...I see that it is already on the Harrison and Hetherington web site http://www.livestock-sales.co.uk/2011/alpacas/0829/index.html
(don't know why I bothered doing my hair...looks like I forgot to brush it...I did say just use the one where the alpaca is standing correctly...oh well!)﻿. I did go with the intention of purchasing lot 24; Blueberry Alonso Renata 11 (Champion Intermediate Female and Best of British Champion at Northumberland Show 2011), unfortunately so had someone else. The bidding was fast and she went for the absolute maximum that I was prepared to pay (and much more that I had hoped I would have to spend!).
Our black female Blueberry Sinbad Blackbird was the third most expensive alpaca sold...I just don't get bargains! I wanted to get a little herd of 3 young females so that they could be quarantined together and the third female was chosen based on her fleece stats but also because she is due soon...I like the gamble...will she have a female...if so she may well be a bargain! She is Blueberry Max Nicola and carries Rural Alianza Don Pepe of Wessex and NWA Ltd Ruffo genetics.
Jim chooses his alpaca names as a combination of the dam and sire. Sometimes this is a bit confusing (I noticed that one gelding who had Matador as his sire and Magnolia as his dam, had ended up as Matt Magnolia...paint may be better in matt not sure about an alpaca....gloss?!) Therefore as her mum is already called Blackbird I think I will be calling Blackbird, Biba. 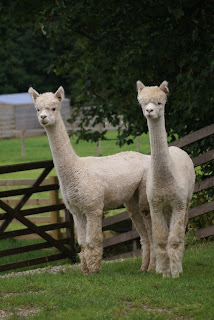 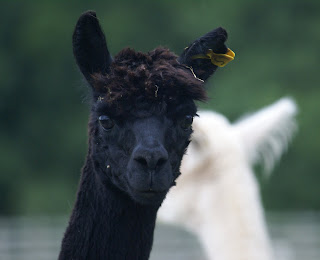 Biba
This morning I took along some poo samples, including those from the new girls, to the VLA for testing. We do have the kit to do our own, but had been asked to provide some alpaca poo to the laboratory 'as a favour'. It seems that they are to be tested on their sampling techniques and reporting of alpaca fecal egg counts. So I supply some poo and I get the results for free...even better I was given a nice bottle of Rioja for my trouble...turning poo into wine...can't be bad.
Just picking up a comment that Judi made on an earlier blog regarding sensitive skin (Phoebe an alpaca belonging to Robyn and Craig is hypersensitive since having mites last year) unfortunately the vet ﻿didn't really have anything additional to add. We have tried everything (including recently treating her as if she had mites just in case we had got it wrong, but it didn't make the slightest difference). It does seem to be related to flies so we think that it may be a reaction to insect bites. She really is much better on wet and windy days and doesn't seem to itch at all (luckily for her there are plenty of those round these parts). One product that has helped (but leaves the fleece a dreadful mess) is Stop Itch which includes a fly repellent as well as soother, but it is a cream so not the easiest to apply. I had asked the vet about an anti-histamine but this isn't something he could recommend.
And finally...someone has been eating too many pies...Velvet has always amazed us with her ability to squeeze through the stock fencing between alpaca paddocks...quite useful as she often needs to make a swift exit after messing with someone's cria...however she does appear to have gotten a little large for the hole! 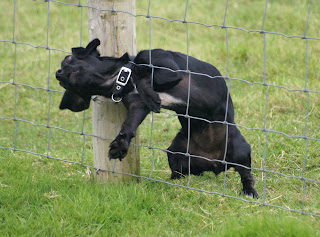