The last birth of the year...

Well Amanda has now completed her apprenticeship at Beck Brow﻿, with the last cria of year being born this morning. Not that she witnessed the birth...no Hoity Toity wasn't playing ball...Paul looked out of the window first thing to spot something very small and very white lying in the paddock. Yes...Hoity had obviously decided...after three days of lovely weather...to birth in the early hours... in the cold.
Amanda has covered most things in the text book...today it was hypothermia. The little fella's temperature was so low it wasn't registering on the thermometer. However he wasn't dry so we expect hadn't been exposed too long. Heat lamp on, draft excluders in place, hairdryer in hand and towels in the microwave. It took some time (3 hours) before we actually got his temperature high enough to feed him. Luckily we always have a good supply of cows colostrum in the freezer (kindly supplied from the farmer who rents some of our land and has 400 births each year!) and we also had plasma. We gave the plasma tubed (I can never get them to drink it) and bottle fed some colostrum.
Unfortunately we have not managed to get him to drink from mum, despite her best efforts. We have held him under, squirted milk in to his mouth, but he just doesn't make the effort to suckle. Now that we feel we have got adequate into him to cover passive transfer, I have left them to it for a few hours to see what he does.
The situation was not helped by poor Hoity having a retained placenta. Looking at her rear end she looked like she had had a tough birth already without struggling with the placenta. I gave her some Finadyne for pain relief but she was still uncomfortable. Eventually we gave some Oxytocin with result (a little gentle help required) and antibiotic cover in the form of Excenel.
Phew...that's it. 6 girls and four boys this year. We haven't decided on a name for our latest arrival. His Dam Silverstream Hoity Toity is a Silverstream Czar daughter (ggs Peruvian Hemingway) and has Jolimont Conquistador on her dam's side. His sire is Anzac Hollywood's Attitude (Sire Jolimont Attitude gs Jolimont Sculptor) and he also has Jolimont Conquistador on his dams side. So the boy comes with some credentials! 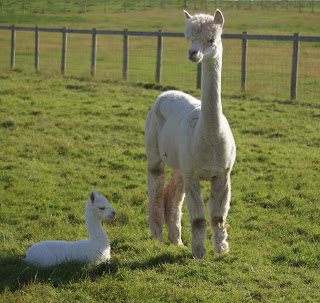 Hoity Toity with her cria (looking more perky this evening) 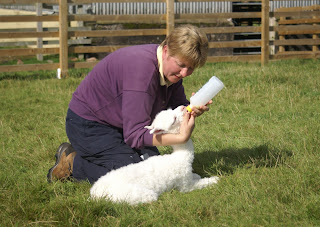 The apprentice at work!
Posted by Unknown at 19:20