We have had so many kind comments, emails and phone calls regarding Explorer's Supreme Championship...thank you so much...it has been really lovely...I think that we must do it again sometime!
Yesterday was 'lets get naked' day here at Beck Brow. An early start; Ben the shearer was here by 07.20 hrs. We have the barn set up so that everyone rotates round which keeps things very slick﻿. Explorer was delighted to be rid of that fleece that causes people to poke about in it, and for him to then have to pouffe. He looked brilliant white for the whole of 10 mins...he wouldn't want to be clean now would he? 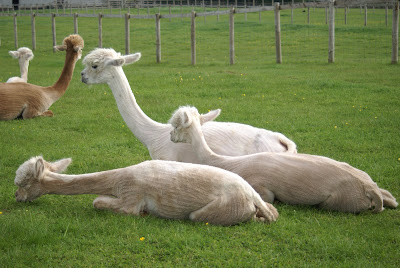 Beck Brow Explorer...pooped after such a busy week...trying out the fawn look!
He is still in with the girls at the moment but will be getting moved in with Nimrod and Julius very soon. Paul is busy building another shelter to accommodate the changes﻿. We let most of the girls back in together post shearing. It was lovely to see the weanlings rush back to their Mum's. All except Explorer of course. 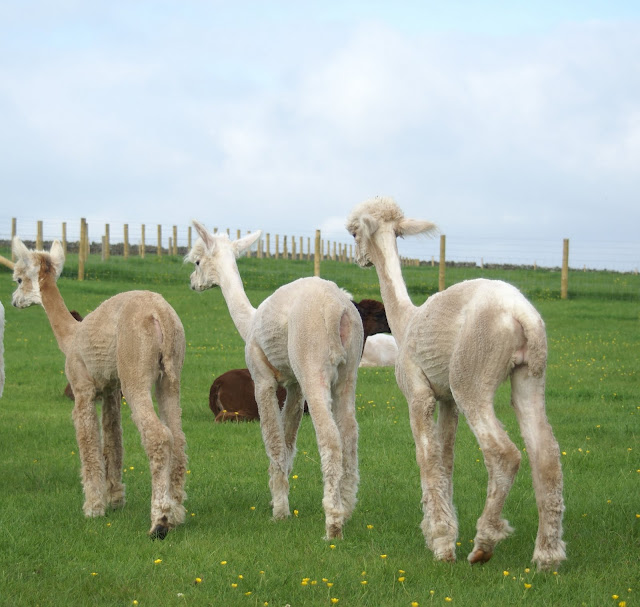 Can you spot the odd one out?...large photo just in case you miss them...he does rather stand out in the girls field now he has his tail fleece off...Paul can now tell the difference between Explorer and Roma!

We had another cria on Tuesday. This one belongs to Young Punk Alpacas (Robyn and Craig). Another mini me, Nina gave birth to a female (Annabelle) at 14.30 hrs (much more civilised than Amanda's!) weighing in at 7.5kg. Nina didn't fully pass the placenta until 21.30 hrs and we were starting to get concerned as she was a bit agitated, making it difficult for the cria to nurse...but she managed and the cria has gained a little weight. As a consequence I ended up being in Tesco at 22.30 hrs buying food for lunch on shearing day. Why is it everyone else's alpacas! 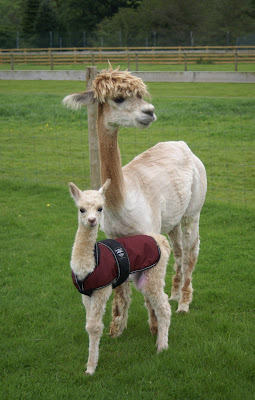 Why Not Nina with Annabelle early this morning...I do think that she looks like Noah (Nina's brother)
Posted by Unknown at 16:22