Reasons to be cheerful...at least three!

The first really sunny day that we have had for ages, and the girls were obviously getting ready to take advantage. The first to the finishing post was Morden Hall Honoria, a female that we purchased at the Futurity Elite Alpaca Auction in 2009 (when you actually had to put your hand up rather than bid on line...much more fun). Pregnant to Ambersun Baltimore (sire Jolimont Warrior) we were expecting a white and had our fingers crossed for a female...and Honoria kindly obliged with a lovely 9.4 kg girl delivered at 11.30 am.

She was quick to her feet but finding the teat was a little more troublesome.With a little assistance she did get there within the 3 hours...after this we would be making plans about how to ensure adequate colostrum needs can be met within the first 6 hours.
. 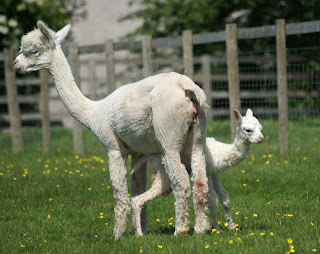 Trying hard but just can't quite get the hang of it!
Holly gave us a couple of hours reprieve before she too delivered a female...a lovely dark fawn or is it light brown?. Born at 13.20 hours and weighing in at 9.9 kgs, she was trying to feed before she was actually up on her feet 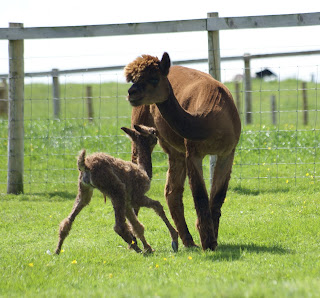 No messing...straight to the teat
Holly's daughter is full sister to Finian (aka as Fin and now residing at Lane End Alpacas). We repeated this mating in the hope of breeding a female version of the lovely Fin...hence we have called her Finesse (sire Legacy of Purston). With a lovely crimpy fleece...if she also has her brothers personality...she will be a little star.

I have decided...as I write...that I will call Honoria's daughter Crystal (registered as Crystal Maze). 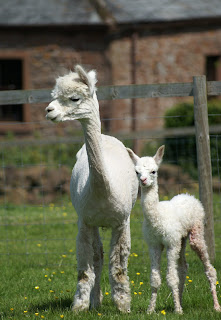 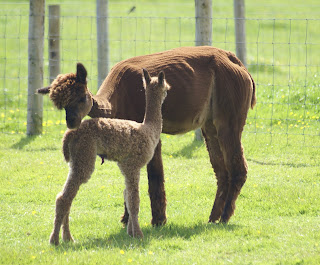 Beck Brow Finesse (sorry seem to have no face shots!)
The third piece of good news is that Magellan has put on a little weight today, and was not keen to take his top up feed when offered. Hopefully Chaska has it cracked. He has been playing more today, another good sign, and generally enjoying the sunshine. 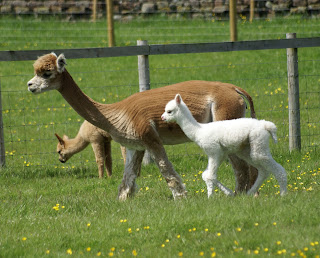 Magellan today...coat off at last!
Today's sunbathing provided an idea opportunity for a little thief...you know how it is you doze off in the sunshine...taking care of your belongings can be difficult...well Katkin was caught out... when flat out... Parisien (her 2010 daughter) helped herself to a drink of milk! Not once but twice. Katkin is now on the case so I don't think we will see a repeat...interesting though...No, she didn't steal the colostrum as we were observing her, but it proves it could happen.
Posted by Unknown at 19:07