Another problem birth...and a hypoxic cria.

It was with a horrible feeling of deja-vu yesterday, that I realized that Minnie was in trouble. Presenting in a very similar way to Pebbles, the vet was rang without delay. Fortunately it was the same vet who had attended earlier in the week, so knew what to expect.

It is now obviously that it is no coincidence that Minnie and Pebbles, who were both maidens, were pregnant to the same male. Hollywood is a big strong boy, and both cria have had heads too large to pass easily through the smaller birthing canals of the two maidens. It was a real struggle, and it was on the last attempt, before opting for a C-section, that the cria was actually pulled out. Thankfully we have no more maidens pregnant to Hollywood, although Nina delivered hers without any problems at all

Poor Minnie had been through the mill. Whilst the vet was checking her over to ensure no internal damage, I quickly got the cria dried. Straight away I noticed the the umbilical was haemorrhaging. Poor Amanda and Robyn were getting instructions shouted out left, right and centre "clamp from the birthing box", "hair drier" "get some towels in the tumble drier drier"...Everyone was flat out.

Minnie got some Finadyne and long acting Amoxipen (she has also been started on a course of Excenel today). Shaking and cold we put on an adult coat and gave her supplies of warm water to drink. The male cria weighed in at 9kg, but was weak with a very rapid respiratory rate. Suspecting an acidosis, secondary to hypoxaemia, due to the prolonged birth, the vet was doing everything to prevent a recurrence of the outcome earlier in the week. We did have the advantage of a body temp of 36, rather than the 32 degrees we had with Pebbles' daughter. A shot of intravenous bicarbonate was given (to reduce blood PH levels) along with Doxapram (to increase respiratory effort and hopefully blow off some of the carbon dioxide...if my ITU knowledge is correct).

Amazingly he seemed to be improving. We managed to get 5% of his body weight of cows colostrum into him within 6 hours and 10% within 24 hours. He is presenting as a 'dummy cria' and has absolutely no idea how to nurse from Minnie and doesn't even try (we really should have milked the colostrum from Minnie, as she has a great milk supply, but she was so uncomfortable). We will now keep milking her and hope that he gets the hang of things in 2-3 days time, when the damage caused to his brain settles down.

He looks amazing all things considered. He just won't nurse. The colours keep on surprising us. Minnie is white (sire Bozedown Razzle Dazzle - light fawn) and Hollywood is light fawn. Here is little Zachery looking very fawn. Thankfully, Minnie absolutely adores him despite the trauma he caused her. 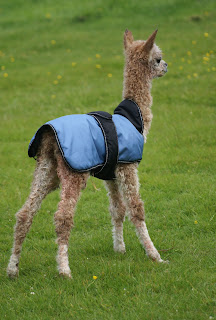 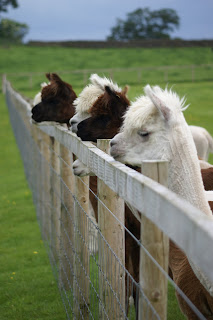 The new arrival causes plenty of interest from the other side of the fence
Everyone else appears to be doing well. We noticed that Magellan was straining over the poo pile with out result yesterday (he had previously been okay) so we gave him a warm soapy water enema, without any effect. With no improvement this morning, he had a Fleet enema and passed a rather hard looking stool. Good result 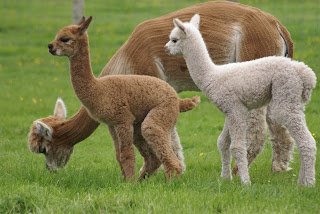 Magellan watching Finesse with envy yesterday!
Posted by Unknown at 15:27