It was the usual routine this morning; the alarm goes off at 6am, and I get up to check on the pregnant females. Having no near neighbours, I thought that I would get them to check out my new Joules pyjamas this morning...nobody was interested...everybody in the barn as usual.﻿ By feed time they had wandered out (unusual) but came rushing back when they heard us.
All in for feed, and Paul spots something lying in a heap, on it's own, at the top of the paddock. Get the box he yells (the birthing/emergency box he means). My heart sinks surely it must be dead if the dam has left it...even then that would be unusual...we run...we arrive...completely out of breath...Paul gets there first (no surprises there)...and bursts out laughing... Not sure how you resuscitate a Laura Ashley cushion (to be fair I have had it since the 80's so it isn't at it's best).  I had accidentally left a couple of cushions out on the bench in the field last night, and one had obviously blown across the paddock.
Having made me run unnecessarily I did try to pay him back later by claiming I could see a black cria in the paddock...but he wasn't the least bit fooled. If Velvet is lost you can guarantee that she will be in the Alpaca paddock. Her and Nutmeg are great friends. I never seem to have the camera with me at the right moment, but Velvet waits until Nutmeg approaches her then kisses her nose...sweet. 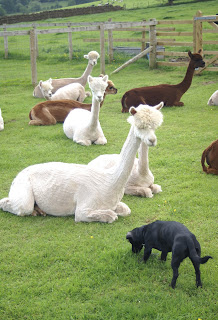 Velvet...pretending to be our only black alpaca
We are now getting used to our naked herd. Judi mentioned different shearing styles in a comment on our last blog. Ours do get quite a severe hair cut, although I did ask for a little more leg fleece to be left on this year than we had last. We did deliberate about the tails. I admit they do look more stylish with the tail fleece left, but I can't tell you how much easier both mating and monitoring births﻿ is without it. Maybe we should have left the boys with theirs though.

Young Punk Annabelle is doing well and gaining weigh steadily. She is now 8.2 kg and is a sturdy little female 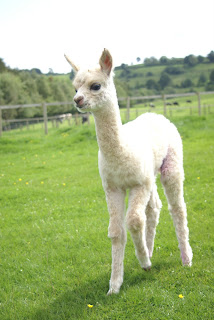 Annabelle
Nina, her dam is very proud and quite protective, but Anabelle is now getting confident enough to check us out.﻿ 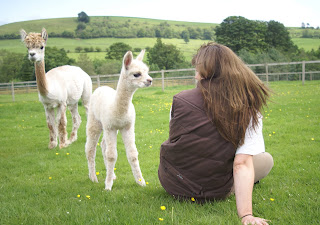 Annabelle with Robyn.
Still no more births despite 8 females now being past their due date. I use 340 days as a due date for maidens, and an average of previous gestation periods as a due date for the older girls, but they are not playing ball. Stanstead is 362 days, and Minnie and Pebbles are just a few days behind her. We have arranged to be away tomorrow afternoon, leaving Craig and Amanda on birthing duty, just you watch, they will get half a dozen!
Posted by Unknown at 14:30