Amanda got the call at around 11 am yesterday "I think Stanstead might be on". Amanda lives about 15 minutes away but made it in 10!...by 13.30 hrs I was debating if I could rush off to Marks and Spencer (leaving Amanda) as food supplies were running low...but no she wasn't quite right. At last she went into the second stage of labour and we got a nose and two front feet. We waited...and waited...but no further progression. So we caught her and inspected, a little﻿ re positioning of the left leg (the knee was obviously locked) and on the next push the head neck and front legs were out. Well Stanstead got such a shock at the 'alien' hanging out of her that she went mad...spinning round and spitting at it. I had witnessed this before but it was quite an experience for Amanda.
15.40 hrs and she finally had a cria...a lovely dark brown boy, who was up on his feet within 15 minutes and drinking in less than hour. Stanstead passed the placenta within 30 mins of his birth and was a fantastic mum straight away. He weighed in at a respectable 7.0 kg and was 7.2kg this morning. Amanda hasn't made a final choice yet but we call him chocolate button for now. 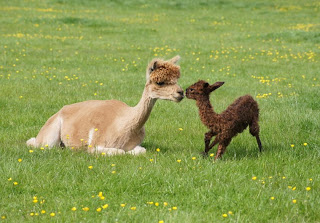 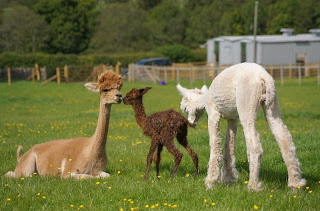 Beck Brow Explorer was first on the scene...checking out if this was going to be the competition 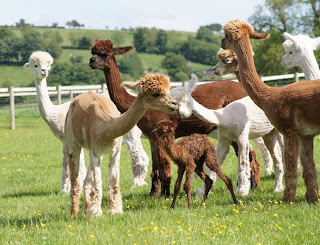 Herd appreciation!
Explorer is still in with the girls. He is enjoying learning about the birds and the bees...best that he learns through nature...rather than me having to teach him...It's not my favourite job pointing them in the right direction (I do know someone who is a dab hand thou!)  He isn't really being a pest other than to Lucie, who doesn't seem to mind him at all. They are always together. He does seem to prefer the monogamous approach, hopefully he will grow out of that by next year. He was orgling on top of Lucie earlier...and I thought that he was going to nuzzle her ear...but he pouffed instead...not quite the dreamboat. Just wait a little Lucie and you will be meeting Waradene St. Patrick... who is the perfect gent.﻿
I was sure that I would get a cria today but still no. I have to attend a meeting tomorrow (as someone convinced me that taking over as co-ordinator of the alpaca show at Westmorland was a good idea!) so one is bound to arrive when I am out. It could be any one of 10 looking at their behaviour today.
Posted by Unknown at 16:56