I had my suspicions. I even got a little nuzzle without asking yesterday. Miss Hoity Toity was being far too friendly for a girl with pregnancy hormones circulating through her system. In fact not hoity toity in the least. Unfortunately I was right and she sat again for Hollywood this morning.

This will be the third mating for Hoity. We started off way back in May. She sits readily to mate then spits off the male (suggesting that she is pregnant) for 6 or 7 weeks then sits again to be re-mated. I felt pretty sure as this week went on that she had slipped her pregnancy again as her behaviour began to change.

The vet is coming to do some scanning on Tuesday so I will seek his opinion on what may be the cause. I will also give some injectable vitamin B12 just in case she is deficient again. However she does look well; is pretty perky; and has been having a vitamin and mineral drench regularly (Hoity miscarried at 5-months gestation in January and was found to be anaemic).

On a positive point, if she can keep pregnant now at least EPC Lady Gaga will have a birthing partner as she will also be due in late August next year all being well.

I had a magic moment last night in the paddock. Unfortunately no camera in hand but just enough time to call Paul to witness the event. Nine cria pronking around the paddock. In one barn door and out the other around the paddock and back again. Now pronking is always magical but why so excited?....It was the first time I have ever seen Explorer pronk!

Explorer has never been one to join in the dancing. He enjoys the biology and is excellent at drama but never ever does pronking. We just thought it wasn't his scene; not macho enough for him; might involve looking like he was enjoying himself; might even give the impression that he was less than superior???...we didn't know. Anyway it was less ballerina and more bulldozer but all the same I felt quite emotional. It was so lovely to see him joining in at last. I did say that I had been teaching him some loving ways!

I have been slacking with the photography over the last couple of days. When I did take out the camera today everyone was more interested in the dogs playing in the ajoining paddock! 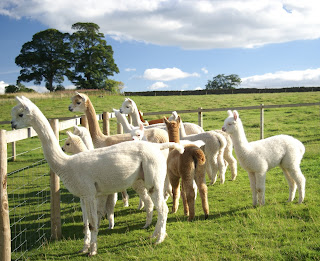 Better than Coronation Street...
Posted by Unknown at 15:10