The new trailer gets an outing...but did they all fit in?

First off we were both in agreement. It towed like a dream...smooth as smooth...didn't feel too heavy...we were making good time. So far so good. We arrived exactly as planned. Our new trailer was admired. Now the test...would they all fit in...no alpacas...just 350+ fleeces. To cut to the chase...the answer is No. We pushed, we squashed, we sat on them...but no! I was so determined not to be beaten Paul drove home with an open bag pushed up against the back of his head...I did see the spider crawl out and down the back of his T-shirt but it did take him a while to notice! I guess about 40 fleece were left behind...not a bad effort. 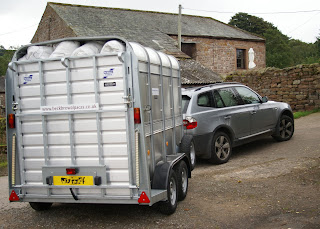 Packed to the rafters...trailer and car!
Poppet is doing well...even if I am not!. She is gaining approximately 500gs per day. I registered her with the British Alpacas Society (BAS) today. I have been on my best behaviour this year and placed my registrations within 6 days of birth as recommended.
I have to admit to being a fan of large scale data collection; so much can be learned and improvements made if the information gathered is analysed correctly. I think the danger is that when cria are not registered early those that do not survive to adulthood fail to be recorded. This means that accurate cria survival rates are likely to be unknown by BAS.
We visited a large breeder recently who has enough alpacas to really look at trends such as age of the female at mating, time of mating, and how this influences survival rates. They are working closely with a veterinary practitioner to analyse the data that has been collected over a long period. Right up my street. I have some theories. I can't wait to hear the findings.
On a lighter note some photos of Poppet taken on Saturday: She is so friendly that she keeps coming to sit beside me. Not easy to get a photograph when she is so close! 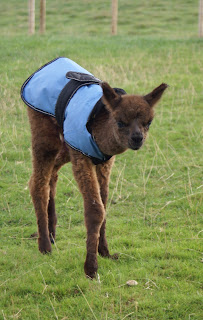 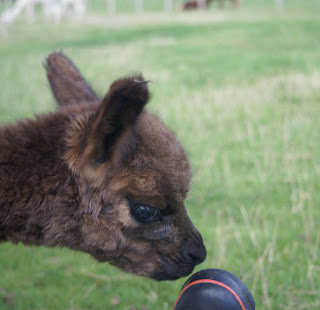 Another fan of Hunter wellies!
Posted by Unknown at 19:50