They do say that there is no rest for the wicked....If this is so then I have obviously been pretty bad at some point. You see, I did think that the sore neck might have got me some reprieve from fleece skirting. At least for a while. However Paul obviously had other ideas. Generous to a fault he gave up a couple of hours of his time today to help me out...fleece sorting?..No... He has made me a fleece skirting table with longer legs so that I don't have to lean over!! Lovely surprise Paul. 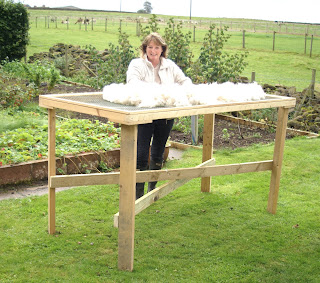 That isn't a smile it's a grimace!
We have been trimming toe nails this morning which hasn't helped the aches and pains at all. I can never decide if being the handler or the chiropodist﻿ is the better option. As all the alpacas were soaking wet neither job was especially pleasant today.
However, everyone behaved very well. With only one exception. One enormous, almighty, very very naughty exception...Hoity  Toity! Obviously still pregnant. I am guessing that 2008 was a H year at Silverstream Alpacas...if only they had named her Harmony...I wonder?
On the other end of the behaviour scale was Bozedown Blanche. I am so proud of the relationship I have managed to achieve with her. Blanche, who is eight, used to be a mean green spitting machine. And a very good aim to boot. I have to admit that I did used to call her the 'old goat' as she was so bad tempered. However, some face and ear massage and she is now one transformed alpaca.
Velvet our Jack Russell, Cocker Spaniel cross puppy has been causing us some amusement. Is it just us or does she look like a 'cut and shunt': Spaniel paws at the front; terrier paws on the back? 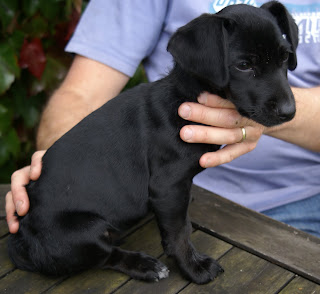 A little late in the year for shearing I know but Tyke has been for a cut and blow dry. Normally I just give him a quick trim with some old kitchen scissors...a rather scruffy but cute look I thought...obviously not. Mum and Dad presented me with a card for a dog grooming service. A man at the bowling club seemingly had a Yorkshire Terrier who looked much smarter than Tyke! 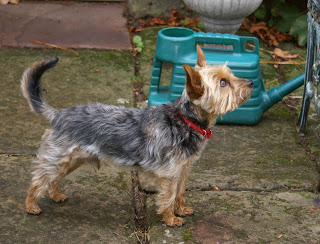 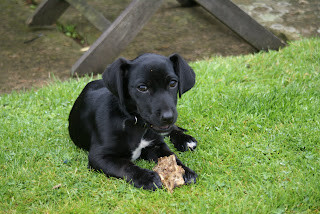 Velvet...looking cute? On closer inspection I think that might be something dead between those paws...not so cute!
Posted by Unknown at 16:42