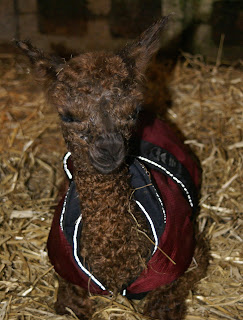 After a couple of days of lovely September sunshine...Bahati decided to give birth...just as the heavens decided to open! So it was a quick dash to the barn for mum and cria.

Here she is pictured at just 20 minutes-old. A beautiful dark brown as predicted....and another girl. Well done Bahati that's three daughters in a row. I really did think that it would be a boy this time.

Bahati, pictured below, is a brown girl with a strong black pedigree who has so far always produced only dark brown girls, all from black sires. Blueberry Sinbad Holly is the daddy on this occasion.

I had thought that I might name her Beck Brow Paige Turner although I do keep referring to her as Poppet. Paul has yet to see her so may have other ideas...somehow I don't see him shouting Poppet up the field! 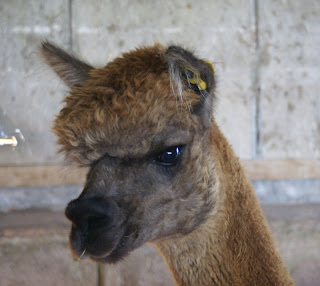 Blueberry Samurai Bahati
Despite a poor weather decision Bahati did choose a convenient 10.30 am slot to deliver. This gave me just enough time to ensure both mum and cria were okay and that ﻿the teat had been found, before getting the boys in.
Hollywood had a visit booked in with two lovely fawn girls, who arrived this afternoon. As we have finished our own matings for this year this was a bonus outing for Hollywood. We gave him an hour and a half in between matings so fingers crossed that he has performed well. One of the females has produced prize winning progeny in the past (the other a maiden) so it will be interesting to see what he produces. It is a gamble with an unproven male but we hope that his elite genetics will give the desired results. The waiting game has commenced.
﻿Yesterday I drove to Yorkshire with a load of fleece (75 kgs) to hand over to Paul at the Halifax Spinning Company. Some of you may be wondering what I am going to do with all this wool...well that makes two of us... I am meeting with our designer in a couple of weeks hopefully she will know! In the mean time I tried to get some photos of the latest shades. I though if I photographed it in the window the light behind would help...No. I will try again when it is not raining. 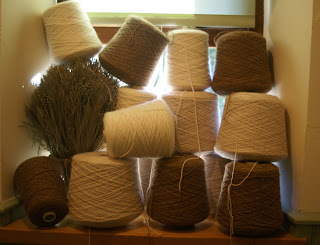 You will have to take my word for it...it looks and feels great!
Posted by Unknown at 17:44