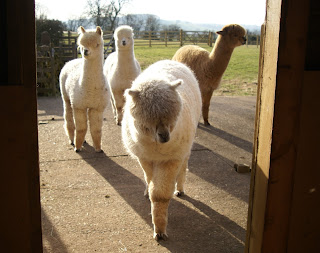 Camilla, who scanned empty, is now huge and is spending a lot of time lying around rather arkwardly. Getting up and down is now done very tentatively and she really isn't in the mood for anything; So we will assume that she is most definitely pregnant (might I regret that certainty?). She is now 338 days so we are keeping a close eye on her.

Thoughts of pregnant alpacas has got me planning our matings for the spring and summer. This year we have 11 females due to 7 different males and I had envisaged that this might be a record for us, for a while anyway. However, if everything goes to plan it looks like we may be using 7 males again this season. This is partly due to a couple of failed matings that have been carried forward to this year. Final decisions will be based on what the girls produce this year but I have pencilled in my plans for them.

We are banking on Hollywood being ready to work very soon although he is still acting like an adolescent for much of the time. Sam, our rescued stray cat, still likes to spend most of his time outdoors and has taken to adopting the shelter belonging to Hollwood and chums. As you can see by the photo: Hollywood has been sent in first to check things out but isn't sure he wants to be the big boy after all!
Posted by Unknown at 19:27