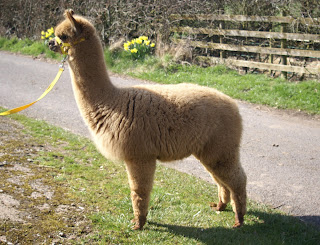 It has been another gloriously sunny day here at Beck Brow. It really does perk everyone up. So much so we have managed to cross quite a few jobs off the to do list.

The halter training went reasonably well this morning. Willow is rapidly improving (why are the boys so much better at this?). As you can see by the photo she is very good at standing still; It is the moving bit we need to improve upon.

Willow is the daughter of Bozedown Blanche (one of the foundation girls discussed in an earlier blog). As you can see from the fleece shot, Willow is a lovely solid dark fawn and was a rather nice surprise as Blanche had had a white girl the previous year (Blanche is white with a large dark fawn patch travelling down both shoulders). I intend to mate Willow with Hollywood's Attitude next year, this will hopefully add some density to the mix. I am constantly making long term plans; It's just some patience that I now need! 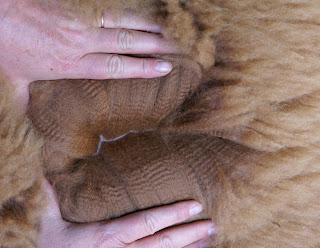 Willow's fleece (not a stray off colour fibre to be found)
Everyone has been moved today. Alpacas to fresh grass (the girl's paddock will now be left for this year's hay) and the ponies to no grass. It is a case of being cruel to be kind I'm afraid. The fertiliser was spread on the land last week and the ponies only have to look at too much spring grass before they get laminitis. I have to admit things did not go too smoothly with the pony moving. The stallions managed to escape back to their old field twice. As you can imagine Paul was not impressed with "my ponies"! The castrated alpaca boys have also been moved back in with their chums. Poor Snowstorm had to endure 30 minutes of Legacy's screeching. Some friend he is!
Posted by Unknown at 15:36