What excitement this morning. Paul nearly fell down the stairs rushing to see what I was shouting about. Had we been burgled? The house was on fire? No. But it was rather a shock first thing in the morning!

Sorry I need to set the scene: Last year we went to purchase some bantams from a local breeder and whilst we were there he persuaded us to buy a couple of American Game Birds. "Bit flighty lass but they will settle down". Well they didn't and ended up sleeping in the hay barn. Unfortunately their wild ways meant that one of them disappeared just over a year ago (a nasty fox I guess). The remaining bird comes out to feed and spends her days with the hens. She just doesn't want to sleep with them.

This morning she came in to the yard to feed, followed by two little chicks. Hardly the surprise of the year you might be thinking. Well it is when you don't have a cockerel!! Where has she been? A neighbour two fields away has hens but I have never heard a cockle-doodle-doo. Can an American Game Bird mate with a pheasant? A cock pheasant does come to be fed every day. 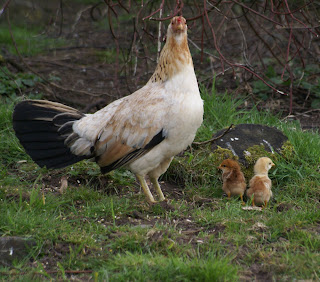 Hopefully they will survive Mr Fox and we will see how they turn out. One is much lighter than the other so I am guessing that we have a girl and a boy. I might try and catch her tonight to put her indoors but I expect it will be futile. Lets hope the alpacas frighten off any predators.

I just need some alpaca babies now. Come on girls.
Posted by Unknown at 07:47