Nothing to do with alpacas I know, but I wonder if anyone has any ideas about what might be wrong with Velvet (our young dog). After being perfectly okay this morning she was sick at lunch time but otherwise seemed well. Then she suddenly began acting strangely, with jerky movements, walking backwards and shaking her head. She then appeared to loose her sight (her pupils are very dilated). She has a slightly raised temperature. We took her to see the vet and he gave her a shot of antibiotics and a sedative and said see how she goes. The vet looked in her eyes and reported no signs of a bleed or swelling but there is something wrong neurologically. We are worried.﻿
We had our farm vet (different from pet vet) out on Friday to microchip the cria and to scan some of the girls who we were having difficulty assessing for pregnancies with spit-offs. All pregnant thankfully. It wasn't until after the vet left that I realised that I had missed scanning Lucie. Lucie is very submissive with St. Patrick, who is rather assertive in his wooing, so is always difficult to read her. Hence I decided to pop her in with Explorer...who had a good sniff where he should not...and got a full on spit for his trouble...pregnant then!
We have moved everyone around over the weekend and Explorer is now back next to Lucie much to his delight. He is now in a paddock previously used by the young girls and is having a day of poo sniffing! 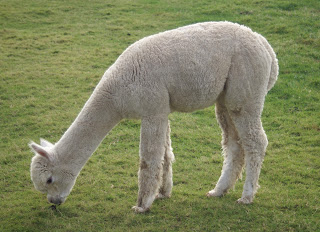 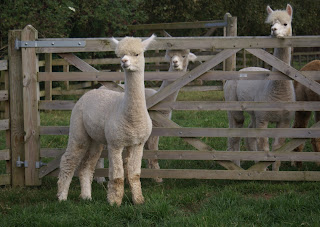 Lucie looking over the gate at Explorer (Roma behind)
St Patrick has gone back over with the other stud males now that we have finished the matings for this year.﻿ The boys were reintroduced with a fence between them yesterday then let in together today. After much screeching, chasing and smelly stuff flying around, St Patrick has let it be known that he is back... and he is top dog!
Legacy arrived back from his holiday by the seaside today (he has been on lease for the summer). I am not sure being greeted by a worming injection was the welcome return that he was expecting. Now, at 14 years of age, he really is top dog. However he is on his own for now before going back in with Snowstorm (poor Snowstorm came as his companion but I don't think that Legacy actually likes him if the way he treats him is anything to go by.)
Posted by Unknown at 17:02