It was an early night on Friday in anticipation of the early rise required on Saturday morning﻿...3am to be precise...and on the road to The YAG Show by 4.30am...possibly a little earlier than necessary as we were unsure how the alpacas would load in the dark, in the middle of the night...but we needn't have worried...Explorer skipped into the van...that boy definitely loves an outing! Hence we were first to arrive at Thirsk...arriving at 6.40 am (we did say we would be there before 7 am for stewaring duties) despite towing the BAS trailer behind the van.
With over a hundred entries (only 4 suris) the show was very well supported by breeders and by the general public. Although a stand alone show, it attracted a lot of visitors...I hadn't restocked our box since Westmorland show and we actually ran out of flyers. A great addition to the show was the 'prettiest girl' and 'handsome boy' classes (for alpacas not handlers). These classes were judged by the spectators and proved a great attraction. 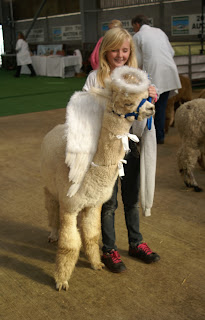 Two pretty girls from Astonishing Alpacas
We took three alpacas, all intermediates; Poppet (real name Paige Turner), Roma (real name Fine Romance) and Explorer (also known as Gorgeous). Poppet, who we were very excited about when she was born, lost some of the character in her first fleece, but her second fleece has come back looking great. Tim Hey, the judge for the day, was certainly impressed. Poppet took first placed Intermediate Fawn Female and Champion Fawn Female...not bad for such a dark fawn!
Roma was next up. We always feel Roma does not do as well as she might as she always gets sweaty and ends up looking like a rag. Thankfully with such a large airy (freezing cold) building we had no problems, and she took second placed Intermediate White Female (behind Fowberry Paloma who was the first placed white female at The British Alpaca Futurity) and Reserve Champion White Female. Roma was praised for her confirmation as well as her fleece...I have to admit she does have great presence. 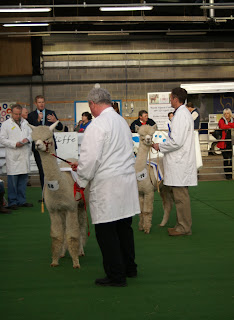 Roma (Beck Brow Fine Romance) takes Reserve Champion White Female
Last but not least was Explorer...who behaved pretty well I thought﻿...he got first placed Intermediate White Male with out a pouffe...unfortunately that did not last into the championship...but he managed to win Champion White Male with just a couple of pouffes...no direct hits (I think that he is getting a reputation, which makes it harder to score, I saw that the ring steward did a good swerve). He was again complimented by the judge on his fleece, especially consistency and density, as well as his confirmation. Roma and Explorer ... now they should make a lovely couple! 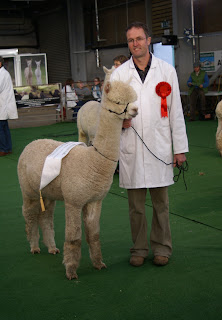 Beck Brow Explorer
So a fantastic outing for us with 3 alpacas, 2 first places, 1 second place, 2 colour championships, and a reserve colour championship. We had to go home without the cup however...there were no surprises when the Supreme Championship went to Fowberry Nobility...a stunning fawn male who we already have in mind for Snooty Boots (look how far ahead we plan!)...summed up by Tim as 'just about as good as it gets' (or something very similar!)﻿
It was rather a long day after such an early start, but Paul and Poppet had no excuse for looking so bored in the fawn class which was just after lunch... 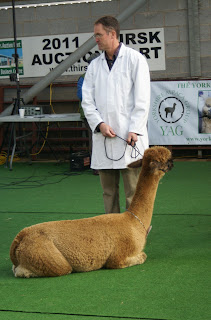 Beck Brow Paige Turner (Poppet) and Paul in the ring.
because we had Poppet and Explorer in the championship line up, and I was stewarding, Andrew from Nerduit ﻿Alpacas took Poppet into the ring for us...and Poppet did seem much more impressed with her handler... 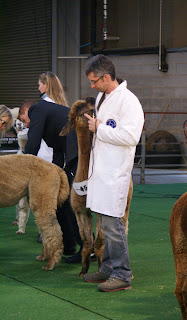 Beck Brow Paige Turner (Poppet)...."I do like a good handler"
Tim did remark to Andrew about using a good male over Poppet as she really is lovely...will that be St Patrick (fawn) or Black Sabbath?...she does have a black sire so maybe the latter? 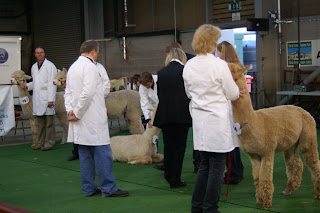 We arrived home to a lovely tattie pot, made by my mum, which was most welcome. I am now going to go and eat the left overs for breakfast!
Posted by Unknown at 09:40