Milking it just a little?

Velvet got the all clear at her vet check up yesterday morning. The consensus of opinion is that she is one lucky little dog (well not so lucky eating fungi but lucky to still be with us). She isn't quite herself and is still pretty tired, all the same I think that she may be beginning to milk it just a little:﻿ 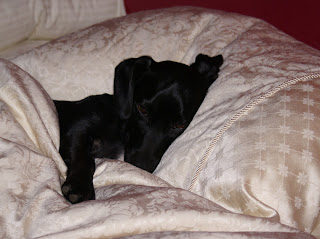 The sick bed!
Yes, Velvet has been allowed to sleep in our bed since she was taken ill (we have had to buy a new quilt as the old one seemed to be missing a few togs...﻿Velvet must be one of the most costly dogs ever!). Paul does not normally give his permission, but even he got soft on this occasion. The paw out means that she is a tad warm...too many togs?
I really should be poo picking...I have been out with the poover...it is far too cold...the poo is all wet (too much rain) and keeps sticking in the pipe...I watched the cria for some time (this is important as problems can be picked up!)...took some photos...and decided I would do it this afternoon (might have dried up by then!)
Boots is causing me a little concern as she just does not put on much weight (she never goes backwards... she just goes forwards very slowly). She is still only 15.4kgs at nearly two months of age. Lady Gaga has milk (although not as abundant as some), Boots drinks at suitable intervals (she is not constantly going for more as though she is hungry), her tummy feels full. She will not entertain being bottle fed. She eats Camelibra, hay and grass. She has gets regular Boost and Go (similar to Jump Start) and has had a selenium, colbolt, Vit B12 drench. She is bright eyed and bushy tailed, always play fighting and in the thick of it. Obviously just not a chunky monkey! 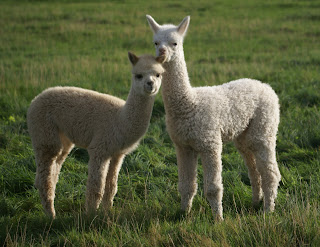 Boots with Quintos (the youngest cria) who over took her long ago...now he IS a chunky monkey! 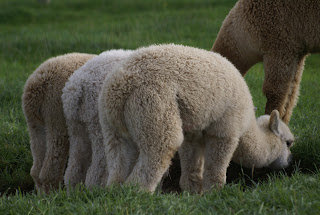 Still we all look the same size when we stand in a hole...Boots, Quintos, Alfie (left to right) 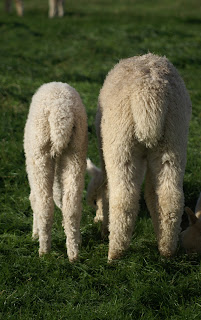 Not the case when out of the hole...Quintos who is our youngest with Magellan our oldest cria 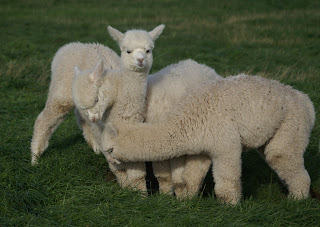 The hole causes much amusement...although Rumour does not look best impressed with the antics of Synergy and Magellan...Boys!! 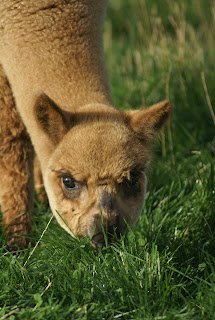 Lastly...Sophie who always keeps out of trouble.
We are off to Wetherby to the Yorkshire Alpaca Group talk by Karin Mueller tomorrow. As it was Paul's birthday yesterday, we are treating ourselves to a night in a spa hotel that is recommended in the Good Food Guide, before heading back on Sunday. Craig is on alpaca and dog duties...I don't suppose he will be poo picking though...I wonder...No!
Posted by Unknown at 12:06