Metisha and Adelle arrive from Easter-Wood

The weekend started off with mixed emotions...we were just getting excited about the impending arrival of our two new girls Easter-Wood Metisha and Easter-Wood Adelle﻿...when we received that sad news that Amanda's Stanstead had lost her St. Patrick pregnancy at four months gestation...what was even more disappointing was to find out that trespassers had been seen on their land lamping during the previous night...stress?...we won't really know.
On a happier note our new girls arrived nice and early. Jeff and Sheila had been up at the crack of dawn and on the road by 5 am, meaning that the girls arrived at Beck Brow at approximately 12.30pm...plenty of time to settle in before dark. We had deliberated about a quarantine group for the new girls... and in the end  decided to make the females and cria into one isolation group...a large group...but we feel reassured by all the bio-security measures and herd health interventions taken by Jeff and Sheila...and felt this was the best option for Adelle (cria). Poo samples tested on arrival confirmed the girls are free of any internal parasite, as expected.
They have both settled in really well and are confident amongst the rest of the herd. Metisha has had to endure all our cria checking her out, but has done so with great tolerance. 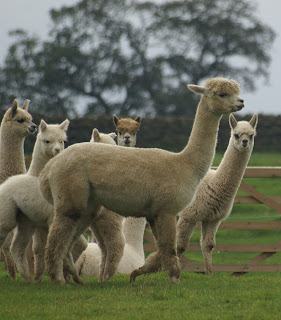 Metisha...Magellan having a sniff!
She is such an elegant female with a beautiful﻿ fine fleece. She has a impressive pedigree and appears to know so...I don't think that she has quite perfected the looking down her nose as would put her in the league of Lady Gaga, but she is not far behind! 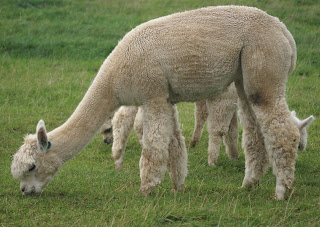 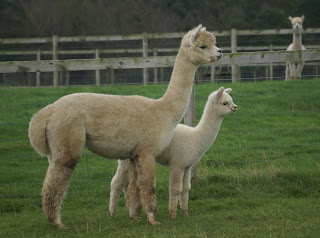 Metisha with Adelle...do I look like my Mum or what?...look at that head...bets are on that she will be one of the stars of the show team...a little stunner with a super fine fleece (see Explorer checking them out...across the isolation paddock...yes they will be your girls one day!)
Jeff and Sheila stayed over night before heading off back just before lunch. Poor Jeff had man flu (we did have sympathy actually...he was feeling pretty rough...I am sure curling up in front of a fire would have been the preferred choice!). Now I know when Jayne (Zanzibah Alpacas) receives visitors she sends them home with home-made goodies...Jeff went home with a couple of loo rolls... for the journey...we had ran out of Kleenex tissues by then!﻿
We had a lovely weekend...with lots of talk about our plans for our alpaca businesses...our plans for next year's matings...our hopes for next year's births...next year's show team...etc etc...you know what it is like when you put alpaca obsessive people together!
We waved Jeff and Sheila off in their very smart alpaca-mobile...making sure that Velvet was not hidden in Sheila's overnight bag! Of course once they had left Robyn and Craig came around and we had another fleece rummage...we are very impressed...thanks guys...they are a fantastic addition to our herd...and perfectly match our goals. 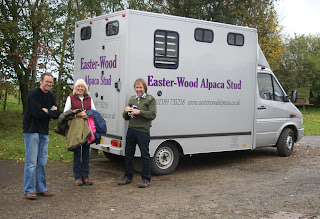