Ready for the move...

Another non-stop but enjoyable week at Beck Brow. I managed to skirt, grade and weight 145 kilos of fleece ready for the mill (feels like it should be more!); I met up with our designer and talked through some ideas; and we even managed a family lunch at The Pheasant near Bassenthwaite Lake yesterday (would highly recommend...yummy); that was after getting an early start on the poo picking.

This morning we have been preparing for the move over to the winter paddocks now that all the births are over for this year. The winter barn floor has been disinfected along with brushes, shovels and troughs etc, ready for a clean start. Mirrors have been polished and whiteboards cleaned.

In addition everyone has had their injection of Cydectin 2% for internal and external parasites and a spray of Eprinex between the toes -  as belt and braces just in case any mites are lingering, we don't want to take them into the clean barn. It was all very slick (it is so much easier with Cydectin rather than Ivomectin which stings) Paul's one way handling system does work really well. No having to remember who has had their injections. If they are on the other side they are done. Records can then be completed later.

The summer barn is to get a new concrete base. This will be much easier to clean than the rubber mats placed on top of a hardcore base that we have at present. The plan is to quarrantine Lady Gaga and Amanda's 2 females over there, away from the main herd, for at least 6 months. All being well with pregnancy scanning I hope that they will be with us in a few weeks time.

I can't believe how quickly the cria are growing. Even Poppet, who is now a very healthy 15 kg and has acquired today's pet name of Chunky Monkey! Noah has become very attached to Poppet. Although he is normally a Mummy's boy, Noah followed Bahati into a different paddock (some distance from the main herd) as she prepared to give birth...very strange!  He then watched closely and with great interest as Bahati went into labour - and even more bizarely Bahati let him - he now seems to think that he has some special bond with Poppet. Who knows what goes on inside the heads' of alpacas but it sure makes interesting viewing! 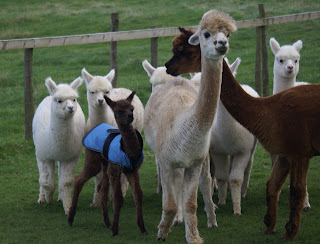 Noah (far left) with Poppet at 1-day old.
I just realised yesterday, whilst updating my records (yes...as well!) that Poppet﻿ shares the same birthday as Pepsi, her full sister born in 2009. They are however quite different. Both are very fine but first impressions of Poppet are that she is going to have a much crimpier fleece type.
I am now giving myself the afternoon off to attend a friend's big 0 birthday party. Talking of which I have opted for Kerala (Southern India) for my birthday... I have a feeling that the tractor is more likely to appear if I feign disinterest!
Posted by Unknown at 12:24