When the anticipation is everything....

Despite the lovely Indian summer that we are having, I have held my resolve and we are leaving Bahati open (not pregnant) until next spring. We have decided not to push our luck. Next autumn may not be so kind. So that will leave us with 16 pregnant girls (14 Beck Brow females and 2 belonging to Amanda) all due to give birth next summer (May-August).

At this stage last year we had 14 girls confirmed pregnant, resulting in 10 live cria. The 4 failed pregnancies were all young maidens who had been mated at between 12 and16 months of age. From this experience we have decided, as a general rule, not to breed very young females. Based on this, our maidens this year were all 22 months of age or older at the time of mating. We will see if this improves our outcomes. I am hoping that patience pays off in the end!

Friday saw us off on a 5 hour round trip to the spinning mill in Yorkshire. Paul had taken a day off work so he came along (he had expected to have a hang over, but more on that later). With 235 kilos to deliver some extra muscle was useful.

We have managed to purchase some amazing fleeces this year resulting in some fabulous yarn. I am very excited at what we are achieving. However, I also took along to the mill some very fine but very messy cria fleece and some less fine fleece with some guard hair. Paul is amazed at how much fleece I discard during skirting and sorting and I wanted to test a point. For me there is no sense in sending anything but the very best to the mill, processing is expensive, and why risk not achieving the very best quality that you can.

Paul (mill owner) had agreed to run some of my discarded fleece through processing in order to check the end result. Undoubtedly an awful lot of the debris does come out of the cria fleece but a tiny bit of seed could just be found here and there. And as for coarser fibre; dehaired or not it will bring down the standard. I will find another use for it, it will not be completely wasted, but rigorous quality control continues!

Back to Paul's reason for a planned day off work. A birthday night out had been planned. A table was booked at a lakeside country house hotel; it was a birthday treat from the family. Robyn and Craig were to join us. Lots of deciding what to wear...I don't really do frocks...so it ended up being old faithful - 6 years old. Still I made an effort. We deliberated over what to have and what wines would accompany what. Our mouths were watering. We had our starters (hand dived scallops for me) and then ....blackness...we waited...still blackness...we waited it is now after 9 pm...blackness. A power cut and a failed generator... An Indian take away it was then! 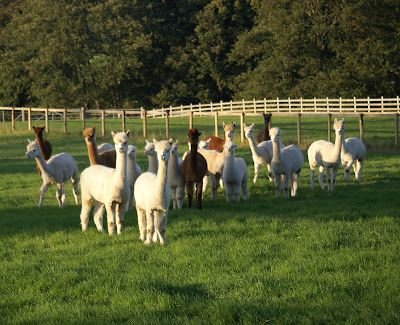 Still plenty of grass thanks to continued warm weather. Some of the girls including: Camilla in the foreground with Hoity-Toity behind.
Posted by Unknown at 17:00