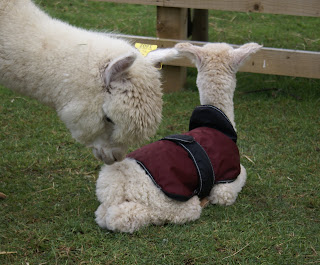 We have decided to name Camilla's little man Explorer. Unfortunately he is far from out of the woods, but he needs to be recognised as the little star that he is. Mum is very proud and rightly so.

This morning he appeared bright enough again and was suckling approximately hourly. He had however failed to gain any weight from the 8.5kgs that he dropped to on Sunday morning. One failed attempt at taking blood and I called the vet out to take a sample. The vet, after examining Explorer, really wasn't keen to do any tests, after all he does look well. However I insisted and his IgG levels came back at less than 100 mg/dl (repeated with same results).

It is safe to say that oral plasma has not worked on this occasion (given at 10 hours old). I probably should clarify that the colostrum we added was powdered just to give energy rather than anything else. We do have cows colostrum in the freezer but he refused to be bottle fed so we chose the plasma to give via the nasogastric tube.

He has now had a intravenous plasma infusion and has been started on prophylactic antibiotics. He still refuses to take anything from the bottle as top up feed but appears strong and is apyrexial. It really is a case of fingers crossed now that he does not acquire an infection, but his chances have certainly been improved by the transfusion.

We went to Northumberland show yesterday, leaving Mum and Dad at home, and were fortunate enough to get out hands on EPC Navigator (Explorer's sire)...wow! I have to say that first impressions of our little guy are also very good.

Houghton Hall alpacas, retained Navigator's undefeated Supreme Champion record and literally took home a bucket full of rosettes. We had to be satisfied with a second (Hollywood) and a third (Almo). However I did think the pair of them looked very handsome and it is always a good day for catching up with friends and fellow breeders.
Posted by Unknown at 19:19