Pebbles has a headache! 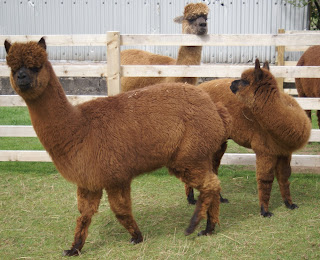 Another blog and no cria news. Warm weather, cold weather, somewhere in between weather, it doesn't seem to matter. Still no babies!

With the excitement of this year's cria gone somewhat off the boil, we have been concentrating our minds on next year's productions. However, we are not having much success in this department either.

Pebbles (pictured with her sister Pepsi and Mum, Bahati, behind) who is 19 months old is absolutely refusing to participate in any activities involving boys.

We had let her watch a couple of matings prior to putting her with Legacy of Purston at the weekend. Legacy is a gentleman and at 13 years of age he has had plenty of practice. No matter, Pebbles was having none of it. I had thought that Legacy with his fineness and history of producing coloured progeny would have been the ideal male for Pebbles. But no.

Maybe she just doesn't fancy the older man I wondered. Female alpacas must have opinions and preferences the same as all of us ladies. With this in mind I tried her with Hollywood's Attitude today, a young macho male. Maybe he would be more to her taste? Unfortunately not. Despite keeping Nina in next to her she became so distressed I had to take poor Hollywood out. Talk about knocking a young man's ego!

Oh well we will leave her for a couple of months and try again. In the meantime she will just have to watch how it's done.
Posted by Unknown at 14:00