Some of you may have noticed the distinct lack of mention of E P Cambridge Lady Gaga on the blog since we were fortunate enough to purchase her at The Futurity Elite Auction in February. The reason being; she is still in Wiltshire! EPC kindly offered to deliver her but have been extremely busy as well as short staffed, hence the delay. She will however be with us very shortly.

In the meantime she is to be shorn tomorrow at EPC rather than risk missing our shearing date. Cathy has her clearly marked out as a show fleece to ensure that extra care is taken during shearing. To say that I am rather looking forward to a peek in that fleece bag is a slight understatement! 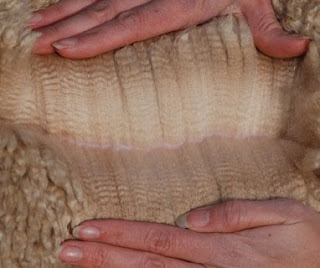 I have decided that Camilla (another EPC girl) is enjoying all the attention around the ‘is she / isn’t she’ debate. I have noticed that when checking the birthing paddock from the house window, however quickly I locate her, she is already looking up at me. She is obviously just being a tease now. As she resolutely refuses to roll in our presence, Paul had a quick feel of her udder this morning whilst I distracted her (kind of). Paul’s opinion; bagging up!

However Camilla is going to have to share the attention from now on; Morden Hall Honaria, another of our elite girls is 338 days and is clearly bagging up (getting her milk in non farming terms). Honaria is the girl that we purchased at The 2009 Futurity Auction (cheque book at home next year!). She was bought with a mating of our choice and we eventually decided on Cambridge Courage (a NWA Ltd Ruffo son). Unfortunately Honaria had other ideas. Like Pebbles she obviously had preferences for a certain male. After two months we had to admit defeat and Honaria was mated with Morden Hall Bergerac (a Bozedown Galaxy son) and she conceived first time. 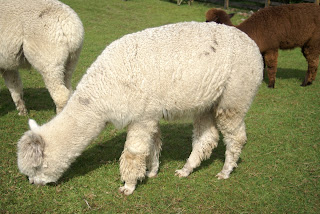 Honario: Never too keen on posing for the camera.
Posted by Unknown at 10:36