Not the weather for it....again! 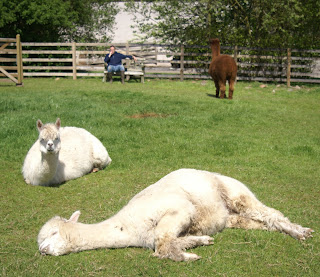 A sunny day was forecast for the North of England today. However, it has turned out to be a bit of an anticlimax, as a cold westerly wind has been about for much of the afternoon. In the short episodes when the wind did decide to drop the pregnant girls got in a little impromptu sunbathing. Honario, who is due at the end of May, is seen in the foreground of the picture. She was definitely demonstrating what a kicking cria looks like earlier on.
As you can see in the background of the photo, Paul is on duty in the birthing paddock, sitting on the field bench watching for any signs of Camilla providing some action. We do have a rota and Sam (the alpaca cat) kindly does his shift too. 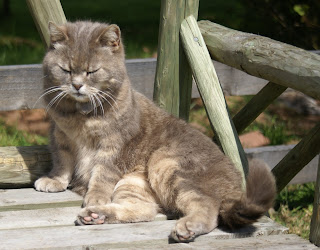 We had been a little concerned about having a shearing date for early June as our two imported girls; Galaxy and Hoity Toity already have at least 14 months of fleece. However it is still far too cold here for taking any clothes off never mind going naked (we have had frost at night just this week!) This is just mad for May; Last year we were worrying about the effects of the heat. Lets just hope for better weather on the east coast Debbie (shearing today) 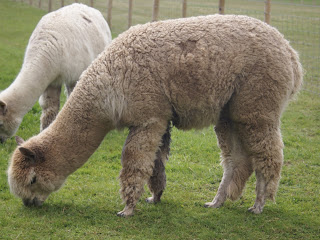 Galaxy (above) and Hoity Toity (below) both have fleece that really should be off their backs and at the mill. Unfortunately we still don't have the weather to be going naked in Cumbria. 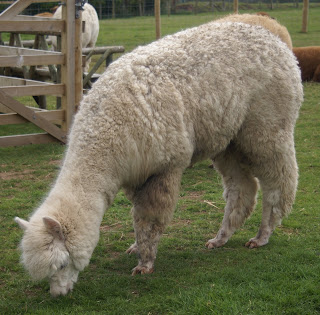