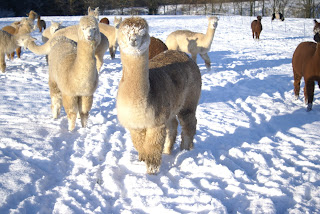 Never tempt fate! Having just finished a conversation about how well the 2 new girls had settled in here, I went out to catch Silverstream Hoity Toity (a Czar daughter) miscarry (a male). HT the white girl in the photo and Galaxy (fawn), both imported in the summer, arrived 4 weeks ago after being confirmed pregnant to Sanjo Shalimar. Both had all the usual tests including E Mac, all negative, and were introduced to the main herd just a few days ago. They were started on Fast Track on arrival (added to their usual feed) and they did appear to be settled. I guess sometimes these things happen whatever care we take. We have started her on a course of antibiotics, as a prophylactic (she is apyrexial), and she was tucking in to her tea earlier. So a long trip back to Anzac in the spring. Debbie, does this remind you of the fun you had with LMI ?....Sandstorm looks like he was worth the wait though.

I know the weather news is getting old news but it is minus 12 here......now that is frost bite cold!
Rations of rolled oats and sugar beet for all. Sharing out the beet is like running the gauntlet here. Camilla, a particularly sweet looking alpaca, is the worst offender, she suddenly starts squealing like a very large pig as soon as she see the bucket in hand!

Hopefully a more cheerful post next time.
Posted by Unknown at 18:00