I owe a big thank you to NFU and Town and Country Kitchens today. We now have water, what luxury. I think the alpacas played their part in the speed of things. Having no water, other than the beck and having animals to care for, prompted the insurers to get thing sorted very quickly. We actually had 4 bursts, all behind the fitted kitchen units so we were very lucky that we were home at the time, otherwise things could have been much worse. What joy to get a shower at home!

Hoity Toity has been amusing me over the past couple of days. Having received plenty of attention over the weekend she has decided she rather likes being special. She is certainly a Czar daughter with a royal attitude....very aptly named I think! I have been feeding her from her own bowl to ensure that she is getting her share of the rations (she is a slow feeder). Yesterday she decided that she would only eat if I actually held the bowl for her. Today she took it one step further by deciding that she wanted to be fed separately from the others, in the feed store, again with me holding the bowl. What have I started! She is very sweet I have to say.

Minnie is getting a little jealous as she is normally the centre of attention . I noticed that she was giving HT a little shove out of the way initially but now appears to have decided that she is her new best friend. If you can't beat em join em I guess! Minnie, who is now pregnant, remains one of the most friendly (and well behaved) alpacas I have ever met. 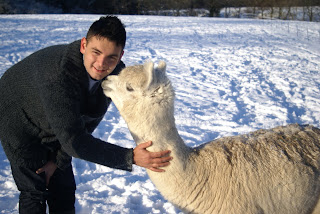 Pic of Minnie and Ben taken a couple of days ago. The snow is melting now and green grass can be seen again. The roads are virtually clear. I actually had a delivery today.....a Wii Fit that I ordered before xmas.....I would like to say that I no longer needed it after all buckets of water that I have carried.....but sadly this is not the case. However whether I use it will be another thing. Another loss of £s rather than lbs most likely!