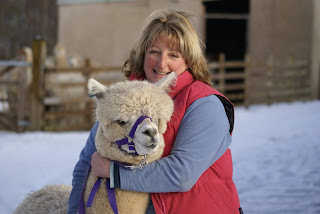 We have running water! It was great to test ones endurance skills, but thank goodness for normal service, and 2 degrees of heat.....nearly tropical!
A great day for some pics without the frost bite.
Hollywood's Attitude is always up for a photo call and a hug. it is very hard to resist a snuggle up (as you can just make out in the photo the girls in the background are also checking him out). Whilst condition scoring yesterday, I took the opportunity to assess a fleece or 2. I completed the BAS Stage 1 Judging course down in Devon a couple of months ago, and have been looking for an opportunity to have a better look at some of the team ever since. It seem that whenever I have had the time, and some assistance, the fleeces have always been wet or frozen! Hollywood's 2nd fleece has come back well, with really good definition and handle, and great density. He is a very uniform colour, registerd as mid fawn but he is the lighter end of the spectrum.
When our friends arrived for some hay supplies this afternoon, I quickly grabbed the camera and recruited them as assistants for some fleece shots (hadn't even made them a cup of coffee!). My intention was to get some shots of Hollywood's Attitude and Almost Illegal for the web site. Well, the boys were very well behaved but how difficult is it to capture fleece quality on camera. I think I will have to wait until it is off the boys and on a table! Almo's didn't come out at all. I have attached a shot of Hollywood's fleece......not exactly web site photographic standards. Try again! Last years fleece shot will have to stay. 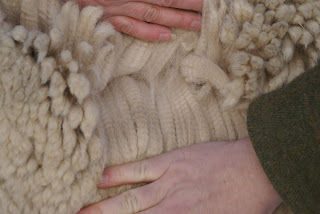 I will not be putting Almo on the site until next year so plenty of time. Anzac Almost Illegal (Almo) is a mid fawn boy that we have purchased as a potential stud male. We put a deposit down on him at 6 months of age, then waited for him to be weaned before taking delivery. It is a slight gamble buying such a youngster, but it is really exciting being involved right from the beginning and watching them progress. He has great genetics (Stormtrooper...gs Conquistador) and has a stunning fleece, so we are really hoping that he will be worth the wait. Photo below of Almo in the summer (10 mths) ....nice to get away from snow pics I think! 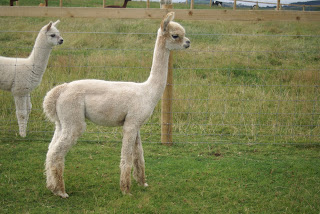 Fingers crossed that that water does not freeze again over night.