The new girl and an abscess...

As I mentioned in my last blog, I did eventually make a decision on the colour of our latest (and last for some time) alpaca purchase. After deliberating between black and fawn, it is somewhat ironic that I have bought a fawn female from Inca Alpacas; a breeder re known for breeding elite blacks!
Van Dieman Chaska of Inca is a fawn girl that I first saw last summer whilst she was at stud, and not at that point up for sale. She stood out in her small isolation group, having such presence for a female that she could easily have been mistaken for a macho. I have been keeping an eye on her and she just kept coming back to me as the right girl for us. Pregnant to Neptune of Houghton and due her first cria in May, she will - if all goes to plan- be mated with St. Patrick this year. The photo is taken from Alpacaseller if anyone recognises it! 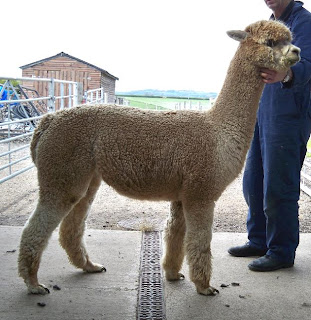 Van Dieman Chaska of Inca.
I have had a busy schedule since coming home from our hols and today was no exception. I had arranged to meet up with Julie a textile artist who is doing some designs of alpaca on silk for us. One of my missions set for our visit to India was to source some top quality silk chiffon. I was a little apprehensive as I had bought 60 meters in total, in five colours...thankfully she liked it...her only complaint was; why hadn't I bought more and why no black! Anyway the designs are fabulous and we have agreed on a scarf and wrap design.
However, I did have a little trauma this morning prior to leaving. I knew Katkin hadn't been quite right for a few days. She was eating okay and there was nothing visible but she just wasn't her usual self. Well this morning﻿ the cause became obvious. It looks like she has developed an abscess possibly at an injection site. I managed to get her in (well to be fair she just came with me...she obviously knew that she needed some help) but not into the barn with the handling system. I wasn't sure if I could do it single-handedly, but I kept thinking of Jane, and I managed to give her a shot of long acting antibiotics, get the puss out, irrigate, and spray with anti-bacterial spray. When needs must! 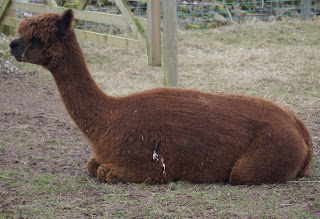 Katkin and her abscess before treatment.
Velvet has been out and about with the alpacas all afternoon. I am sure that she thinks that she is their mate. The alpacas don't seem to mind and go along with it: 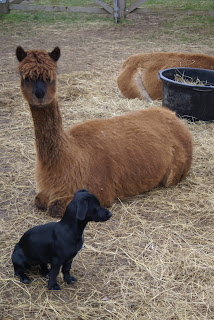 Holly and Velvet.
The final photo for today is of Anzac Almost Illegal (with Nimrod in the background). Almo will be starting work this Spring (although he will have only a couple of girls this year). He has a lovely fine fawn fleece (17.2) with very little guard hair,﻿ so the plan is to put him over a couple of dark brown girls to see if we can retain the colour but improve the micron...such fun experimenting...shame it takes years! 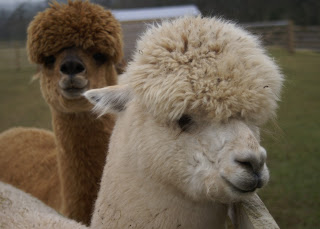 Anzac Almost Illegal...look at those eyelashes!
Posted by Unknown at 17:42