I am pleased to report that the relocation went well yesterday. The boys; Finian, Kenzie and Noah, loaded like a dream, despite never being in a trailer before﻿ and the journey to Bev and Andy's, in North Yorkshire, was trouble free. We arrived just after 1.30 pm, nicely timed for a lovely lunch and some bubbles to celebrate.
I wasn't sure how I would feel about leaving the boys, and Fin in particular. He is the most adorable little fella who was always so happy to see you and was constantly by my side when I was in the paddock. However, I know that the boys couldn't possibly have found more caring owners. Bev and Andy have put lots of research into the the needs of their alpacas and Fin, Kenzie and Noah have everything they could possibly wish for. Three very lucky boys. As a consequence, I didn't find it too difficult to wave goodbye.
The problem has been today...it feels strange...no Fin to greet me this morning...no Fin to follow me about when I am doing the poo picking...just no Fin! I know how Bahati felt now...I haven't quite gone as far as lying by the gate pining but I may do tomorrow. I relented and reunited Bahati and Poppet hoping it will be easier after she is mated...maybe I should have done the same...waited...waited until I had some more cria that is...not that he is replaceable of course. Luckily Nutmeg is a little sweetie, so at least I still get the odd cuddle.
There seemed to be a bit of Chinese whispers going on about the situation today I noticed: 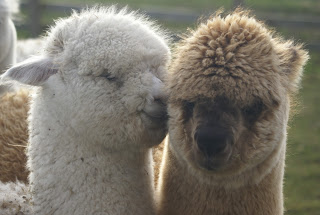 Roma and Parisien:
"I heard that she's forgotten where she left them...she's been losing everything since she had that big birthday...mobile phone, glasses; Fin, Kenzie and Noah..."
; 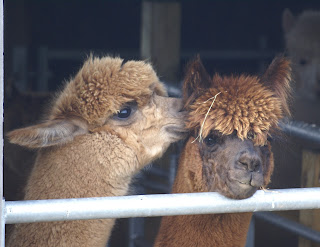 Willow and Pepsi:
"I heard that they've gone on a five star holiday...there was talk of luxury accomodation and lots of water...think it could be The Maldives..."
And the ones that Paul can tell apart: 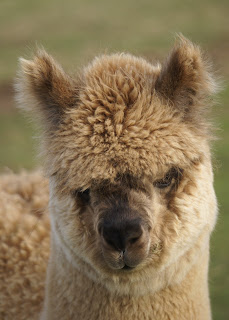 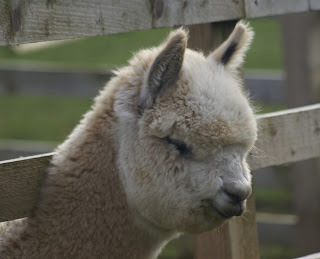